As expected, the Bank of England (BoE) raised the Bank Rate by 25bp to 0.50% and announced the beginning of “passive QT” (ceasing reinvestments of maturing bonds) last week. A major surprise was that four out of nine policymakers voted for a 50bp rate hike sending a hawkish signal to markets that the BoE is very concerned about high inflation.

In the Monetary Policy Report, the BoE notices that both short- and long-term inflation expectations are increasing and above past averages. While the BoE said it cannot do much about supply shocks to prices, policymakers are worried that inflation will become more persistent through e.g. higher wage growth. We believe the BoE’s wage growth projection is to the low side. 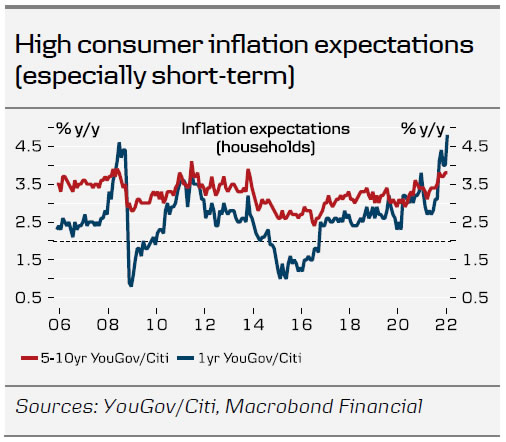 BoE Governor Andrew Bailey, however, pushed slightly against market pricing by saying that it would be a mistake to assume rates are on an inevitable long march up. Also the BoE repeated that “some modest tightening” is needed.

It is noteworthy, however, that the BoE now projects inflation below the 2% target based on market pricing ahead of the meeting. Uncertainty is obviously high forecasting inflation three years from now but it may explain why BoE Governor Andrew Bailey said there is a limit to how much the BoE will hike. Markets are, however, not listening so much to central banks these days, as central banks have underestimated the underlying inflation pressure for quite some time.

Taking everything into account, we now expect the BoE to deliver four additional 25bp rate hikes this year (March, May, August and November) versus two additional hikes previously. Our new BoE call remains slightly less aggressive than markets pricing, where five rate hikes are priced in. We continue to believe that risk is skewed towards more rate hikes (and also a probability of a 50bp rate hike). BoE is now likely to announce some details on “active QT” in connection with the May meeting.

Initially, EUR/GBP fell slightly below 0.83 on the hawkish signal but EUR/GBP is now trading closer to 0.85 supported by the ECB. We are still of the view that the level of around 0.83 was the bottom in the cross, as relative rates now seem more supportive for EUR than GBP, as BoE rate hikes are already priced in and the ECB is turning more hawkish. Overall, we still see the 2022 investment environment as USD-positive, which is usually benefitting GBP relative to EUR, which we believe will dominate slightly. Hence, we continue targeting EUR/GBP at 0.84 in 12M.

Our Bank of England call summarised

We now expect the Bank of England to hike four more times this year (March, May, August and November) versus two previously. Markets are pricing in five rate hikes.

We expect the Bank of England to announce “active QT” (selling government bonds to markets) in May when the Bank Rate reaches 1.00%.

Risks are still skewed towards the Bank of England hiking faster (for instance we cannot rule out a 50bp rate hike in March).