AUDJPY has pushed over the mid-Bollinger band and is confronting the 83.00 handle after gaining some traction from the 200-period simple moving average (SMA). The longer-term horizontal SMAs are endorsing the broader neutral picture, while the climbing 50-period SMA, which is nearing a bullish crossover of the 200-period SMA as well, suggests that the recent upside trend from the 80.36 trough remains active.

The short-term oscillators are reflecting that positive momentum is regaining strength. The MACD, in the positive zone and below its red trigger line, is starting to turn higher, while the RSI has bounced off the 50 neutral threshold. Furthermore, the %K line has made a U-turn and overstepped the %D line in the oversold territory.

If bullish price action develops past the 83.00 mark, the next resistance could emerge at the upper Bollinger band at 83.46. If the price nudges past this barrier too, the tough neighbouring 83.74 border and the 83.98 fresh peak may try to curb advances from acquiring pace. Failing to do so, buyers may have the chance to reinforce a bullish bias should they conquer the 84.28-84.48 resistance ceiling that has held since November 2021. Succeeding could then encourage the bulls to target the 85.20 high, identified at the beginning of November 2021.

If positive powers fade and the price slips back beneath the mid-Bollinger band, a prompt floor may act between the 200-period SMA at 82.47 and the 82.36 obstacle. If this upside defence breaks down, the support band from the 50-period SMA at 82.16 until the 82.03 low could then step into the spotlight. However, if a deeper retreat in the pair evolves, the 100-period SMA at 81.82 may delay the test of the congested lows of 81.49 and 81.28.

Summarizing, AUDJPY’s neutral-to-bullish tone is amping up after finding footing off the 200-period SMA, and a definitive close above the 83.00 hurdle could accelerate it. Yet, for the bias to become bullish, the price would need to propel north of the 84.28-84.48 barricade, while a drop in the pair beneath the 100-period SMA at 81.82 may bolster negative pressures. 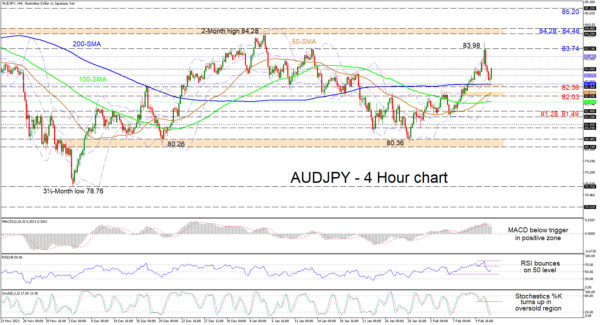