The Euro stands at the back foot on Friday following a bumpy ride after US inflation data on Thursday, but the action ended in a long-legged Doji candle, signaling strong indecision.

Although Friday’s action is in red, the downside remains limited by rising 10DMA (today’s attempts lower stalled near yesterday’s low).

Stronger than expected rise in US inflation fueled expectations for more aggressive action from Fed (the central bank announced it will start hiking from the next month) with analysts being divided over the size of the rate increase, as many now expect 0.5% hike, while some does not expect the Fed to diverge from expected first post-pandemic hike by 25 basis points.

While Fed remains hawkish, the European central bank is more cautious and not in hurry to start raising interest rates.

The ECB President Lagarde said today that rate hike would not bring down the record high EU inflation and would not affect high oil prices and supply problems that have boosted inflation, but would hurt the economy.

Lagarde said that fast reaction from the central bank won’t solve the problem, but would slow the recovery of the bloc’s economies, suggesting that the ECB should gradually withdraw a massive stimulus and adjust monetary policy instruments when conditions allowed.

Different outlooks from two central banks, in which the Fed is aggressive while ECB remains dovish, would weigh on the single currency in the short-term.

Technical studies on the daily chart are weakening, after the action on Thursday failed to clearly break above daily cloud top, as bullish momentum is fading and RSI turned south.

On the other side, repeated failure to close below 100DMA would keep near-term price action in extended consolidation. 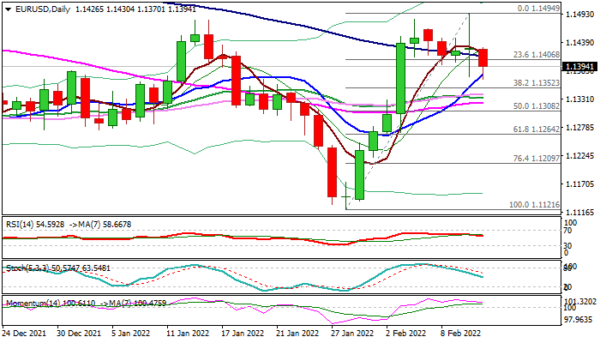