The Weekly Bottom Line: All Eyes on the Price

It was all about inflation this week, as the January CPI surpassed expectations and markets recalibrated their expectations for rate hikes. Headline inflation accelerated 0.5 percentage points to 7.5% year-on-year (y/y) in January, reaching the highest level in 40 years (Chart 1). Strong consumer demand coupled with pandemic-related supply constraints resulted in the strong price gains. Core prices were also up significantly relative to year ago levels at 6.0% (up from 5.5% in December). Price increases were relatively broad based across the index, with categories such as used motor vehicles (up 40.5%) and gasoline (up 40%) recording some of the largest gains versus a year ago. 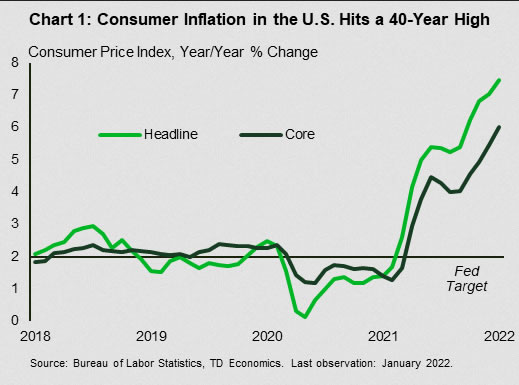 Inflation is increasingly a top concern for small businesses. A survey of independent businesses showed that 22% of owners viewed inflation as their single most important problem in January. This matched the highest level previously recorded in 1981. High input prices coupled with rising labor costs are cutting into small firms’ profits. In response, 61% of firms reported having already raised prices. However, fewer firms (a net 47%) are planning to do so in the next three months, suggesting that firms may be nearing their limit for passing on cost increases to consumers.

Financial markets also responded to the inflation report as equities fell and yields on the 10-Year Treasury touched 2% for the first time since 2019. These movements occurred on the expectation that persistent high inflation will result in tighter Fed policy. The market-implied probability of at least a 50-basis point rate hike at the Fed’s March meeting shifted to over 50% after the report, from 24% the day before, suggesting expectations of more aggressive tightening.

In other data, the U.S. trade deficit widened from $79.3 billion in November to $80.7 billion in December. The nation hit a record trade deficit of $859.1 billion for the full calendar year – a 27% increase over 2020 and blowing past the previous record of $763.5 billion in 2006 (Chart 2). For the year, imports were up 20.5% while exports grew by 18.5%. The notable rise in the trade deficit, highlights the strength of the U.S. economy as it rebounded from the pandemic. Consumers, supported by generous fiscal policy, shifted their spending patterns more towards goods over services during the pandemic, and consumer goods are heavily imported. 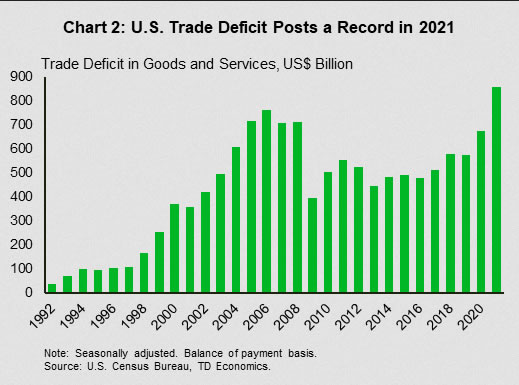 As the pandemic enters its third year, governments and citizens are more and more learning to just live with it. Many states, including California, Oregon, New Jersey, Connecticut, Delaware, New York, Illinois, Massachusetts and Rhode Island, have announced that rules requiring masks and/or proof of vaccinations will end by March. Local governments and school boards, however, have the discretion to maintain their own requirements.

These announcements are a step towards returning to normal, even as recently introduced cross-border vaccine mandates for truck drivers have sparked protests resulting in blockage of the busiest land border crossing between the U.S. and Canada. The slowdown at the Ambassador bridge crossing caused several car manufacturers to halt or slow production due to delays in delivery schedules. As the border re-opens and normal flow of traffic resumes, these disruptions are expected to dissipate.

This week saw bond yields rise, prompted by the impending rate hiking cycle and an upside surprise on U.S. consumer price inflation. Equities managed to hold on to their gains on optimism that demand will bounce back as public health restrictions are rolled back.

First, in a bit of good news for long-term economic prospects, initial estimates for Canada’s 2021 Census were released this week showing Canada’s population grew by 5.2% between 2016 and 2021 (1% annually) – a rate that puts it at the top of the G-7 pack. As immigration was the main driver of population growth, most of these gains occurred between 2016 and 2019, before the pandemic led to border closures and a reduction in international arrivals. Indeed, major population centers relying heavily on new immigrant arrivals saw population growth nosedive when the pandemic closed international travel. For instance, the Toronto Census Metropolitan Area saw population growth slow from 1.4% in 2019/2020 to an estimated 0.2% in 2020/2021. Not surprisingly, amid public health restrictions, Statistics Canada noted Toronto and Montreal posted record population outflows to surrounding areas in 2020/2021.

On the trade front, Tuesday’s release of international trade statistics showed Canada’s trade balanced dipped back into a deficit position in December (Chart 1). Electronic and electrical equipment and parts (+16.2%) and motor vehicles and parts (+5.1%) lifted imports for the month, in part due to restocking after difficulties in acquiring supplies earlier in the year. Nominal exports meanwhile, were dragged lower by a steep decline in energy products, as prices fell. 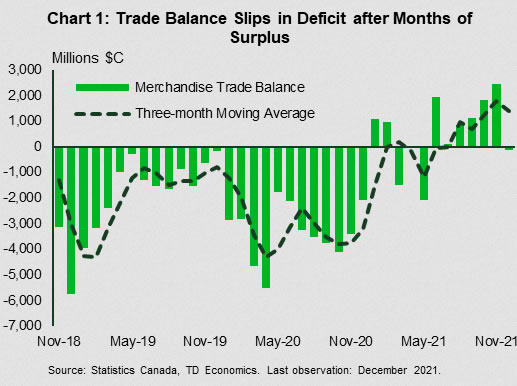 Yet, maybe the most important pieces of information this week came from provincial leaders who began announcing plans to roll back public health restrictions. As of Wednesday, Alberta ended its vaccine mandates and Saskatchewan is set to follow on February 14th. Prince Edward Island set February 17th as the start date of its easing, while Quebec will increase seating limits at restaurants this weekend. These moves signal the start of the economic reopening that should help lift consumer activity. As the services sector reopens, spending will continue to reorient away from goods, relieving some of the pressures on supply chains that have lifted inflation.

Indeed, these were the dynamics Bank of Canada (BoC) Governor Macklem addressed during his speech to the Canadian Chamber of Commerce on Wednesday. The BoC sees easing supply chain constraints helping to bring inflation to “about 3% by the end of the year”. However, the BoC’s target inflation rate is 2%, and to get price growth the rest of the way there, interest rates will be moving higher. As Governor Macklem noted, “a significant shift in monetary policy” is on the way. 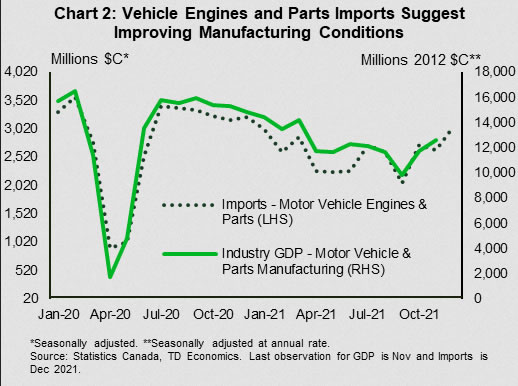