Dollar Recovers ahead of Fed Minutes and Retail Sales

Traders are betting the Fed will take a sledgehammer to crush inflation, but that wasn’t enough to really boost the dollar until fears of armed conflict in Ukraine sent investors into the reserve currency’s safety. The latest retail sales data will hit the markets on Wednesday alongside the minutes of the most recent Fed meeting, and how the dollar reacts could reveal whether the rally is truly exhausted.

With US inflation continuing to accelerate, markets are betting the Fed will be forced to respond with aggressive rate increases. Six and a half rate increases have now been priced in for this year and speculation about a 50 basis points move at the next meeting in March is running wild.

The worrisome part is that the dollar couldn’t properly capitalize on all this. This has been a consistent pattern in recent weeks, with strong US data releases sparking huge moves in bond markets but unable to boost the dollar much. 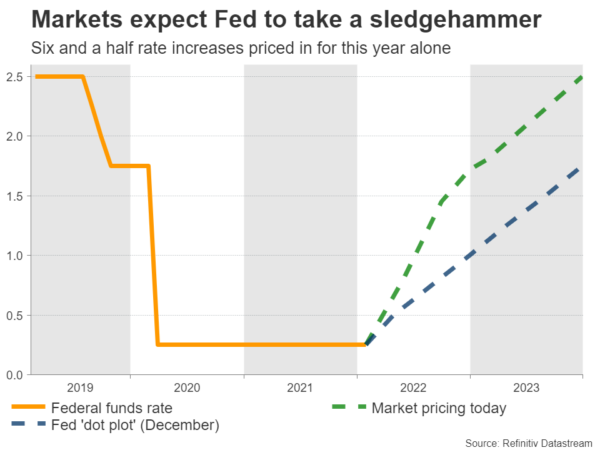 Take last week’s inflation numbers. One extra rate hike was priced into bonds in a matter of hours, yet the dollar barely rose. It did rally eventually, but most of that came down to safe-haven flows after headlines that an invasion of Ukraine may be imminent.

When a currency cannot rally on good news, that’s usually a sign of exhaustion in the trend.

We’ll get a clearer sense of whether that’s true this week. The minutes of the latest Fed meeting will be released at 19:00 GMT on Wednesday. Traders will look for details around the quantitative tightening process and how the various officials feel about a 50 basis points move in March to kick off the tightening cycle. 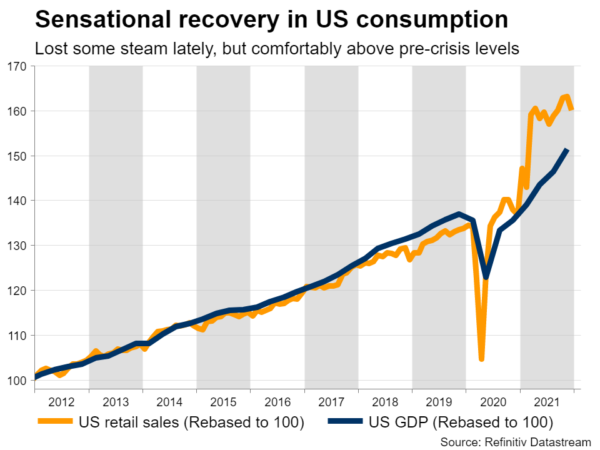 Markets usually react to this release, but this time, the minutes will likely be outdated. This meeting took place before the latest jobs report, where wage growth fired up, and before the latest inflation stats that also exceeded expectations. This means that the argument for tightening policy quickly has become stronger since then.

Instead, the spotlight could fall on retail sales, which will be released a few hours earlier at 13:30 GMT. Forecasts point to a powerful rebound of 2% in January, following a drop of 1.9% the previous month. However, the retail control group that is used in GDP calculations is expected to have risen by only 1% after falling 3.1% in December.

If retail sales exceed expectations and the dollar cannot rally powerfully in response, that would be another sign that the uptrend is running on fumes.

Taking a technical look at euro/dollar, a potential decline could encounter immediate support near the 1.1280 zone, where a violation would turn the focus towards 1.1230.

On the other hand, in case of a disappointment the pair could edge higher. A clear break above the 1.1370 region could open the door towards 1.1485.

Overall, the dollar can be broken down into a short-term and longer-term outlook. In the near term, there might be another push by the bulls. Markets can still price in a seventh rate hike for the year, while geopolitical worries and the volatile environment in stock markets could continue to drive safe-haven flows into the reserve currency.

In the longer term though, the picture seems to be turning. Inflation might peak over the coming months and once that happens, traders could dial back bets for aggressive Fed rate increases. That could have a tremendous FX impact because the Fed is no longer the only game in town – other major central banks including the European one are also moving towards higher rates.

In short, it’s just difficult to see a ton of upside here with the Fed already priced so aggressively, although any trend reversal might be a story for the second half of the year.