USDJPY is exhibiting a bullish tone as it approaches the 116.00 handle after the 50- and 100-day simple moving averages (SMAs) defused sellers’ attempts to steer the pair lower. The soaring SMAs are shielding the broader ascent in the pair.

Additionally, the short-term oscillators suggest that upside momentum is growing. The MACD is holding above its red signal line in the positive section, while the RSI is creeping higher in the bullish zone. Furthermore, the uptick in the stochastic %K line is promoting more advances in the pair.

To the upside, the fortified 116.00-116.34 resistance ceiling could delay price gains from gaining pace. However, if this barrier fails to keep growing bullish pressures at bay, the 116.87 and 117.53 highs, identified in the first half of January 2017, could come under attack. Should a more profound up move evolve, the 118.17-118.66 tough barricade, shaped over early November until mid-December 2016 that includes a double top formation, may be challenged.

Summarizing, USDJPY is currently sustaining a neutral-to-bullish tone above the 115.00 hurdle and the SMAs. A clear break of the 116.00-116.34 boundary could resuscitate the broader uptrend. That said, a price dive below the 113.13-113.52 support base may spark worries about a deeper correction unfolding in the pair. 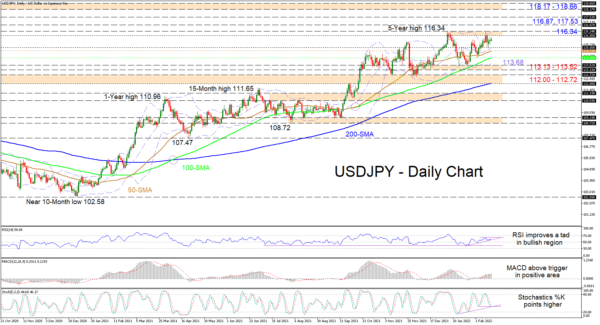