Russia’s invasion of Ukraine is not expected to keep the Bank of Canada from hiking interest rates next Wednesday. Though added disruptions to global supply chains would eventually filter into Canadian trade flows, and higher commodity prices will boost costs for energy and food products, Canada’s direct trade exposure to Russia and Ukraine is small. The domestic economy is also too strong—and inflation pressures too firm—to justify the current emergency levels of interest rates. The BoC in January expected the Omicron wave would be “less severe than previous waves” and current conditions look to be playing out that way. Both employment and the number of hours worked declined sharply in January, but spending appears to have already surged back into February as COVID case counts and restrictions eased.

We expect next week’s Q4 GDP report to come in at 6%. That’s in line with the BoC’s 5.8% forecast from the January monetary policy report and supported by further growth in consumer spending and business investment, as well as a rebuild in inventories following a decline in Q3. We share the Bank of Canada’s view that virus spread will have capped GDP in December and January. Statistics Canada already reported a preliminary estimate that December output was flat from November, and we expect a decline in output in January after hours worked fell due to large numbers of workers self-isolating or off with illnesses. But early data is pointing to a rapid recovery into February. Further gains in household spending will likely be backstopped by improving labour markets and a large stockpile of savings. And capacity pressures, including acute labour shortages, are pushing businesses to invest more. Overall, tight labour markets and higher inflation rates all suggest the economy is running close to longer run capacity limits. We look for the Bank of Canada to follow next week’s expected rate hike with 3 more this year, the next coming as soon as April. 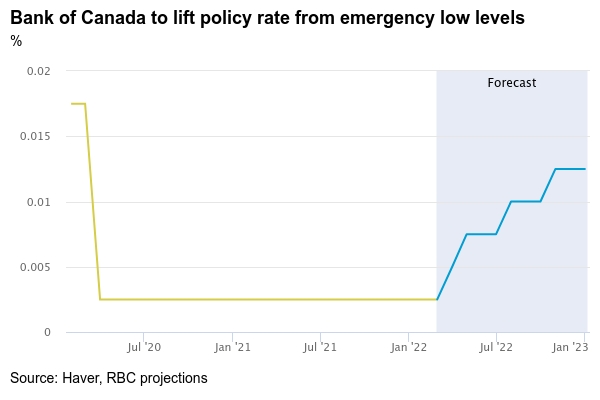 US February payrolls next week are expected to once again point to rising tension in the labor market. Employment likely increased again. And no meaningful changes to the labour force are expected to drive the unemployment rate lower and push wages higher. Average hourly earnings for private sector industries were already 12% above pre-pandemic as of January this year. 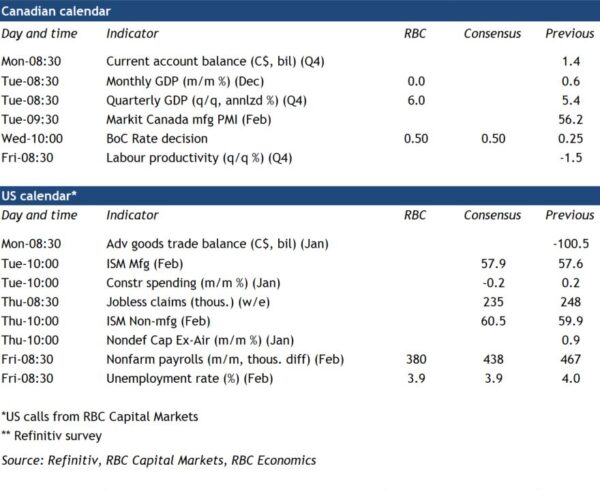