Regrettably, Russia made risk reality this week, launching an all-out invasion of Ukraine. The threat of Russian military aggression had been souring market sentiment for several weeks now, and the invasion worsened declines in equity markets and sent energy prices higher (Chart 1). The S&P 500 entered correction territory this week, relative to its early January highs, and was down 0.2% at time of writing versus a week ago. With Russia’s role as a key global energy supplier, worries about energy supply have driven prices for oil and natural gas higher. The Brent crude benchmark crossed the $100 per barrel threshold for the first time since 2014. 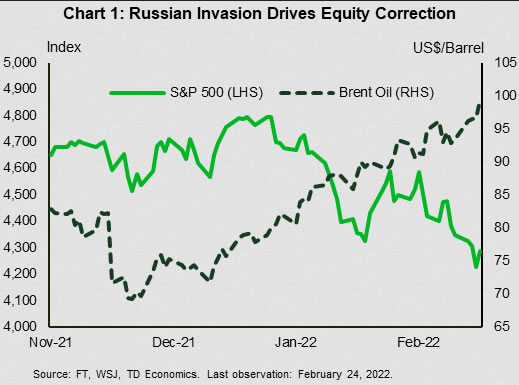 Market selloffs at the outset of wars have historically been short and reversed quickly. That said, there is still likely to be an economic toll on global growth from the conflict, with Europe likely to take the biggest hit. The outcome depends on how long the conflict goes on, and market reaction. We outlined some potential scenarios in our recent report Questions? We’ve Got Answers.

For the U.S., the most immediate impact will come from higher oil prices. These will keep inflation elevated and weigh on purchasing power longer than previously expected. We expect prices to ease as the conflict does, but how long it lasts is highly uncertain. The West Texas Intermediate oil price is around $92 per barrel at time of writing, up over 20% from the start of the year. If it were to remain above $90 per barrel for the remained of the year, it would shave a few tenths off of real GDP growth in 2022. We are currently tracking real GDP to grow of 2.8% in 2022 (Q4/Q4), so a slightly softer pace would still be a solid pace for growth.

The conflict in Europe comes just three weeks ahead of what is widely expected to be the Federal Reserve’s first interest rate hike. The war is unlikely to prevent the Fed from taking its policy rate off the floor. At 0.5%, the federal funds rate will remain highly stimulative. The Fed is behind the curve on inflation and can no longer wait for the perfect moment to begin normalizing policy.

On that front, the core personal consumption expenditure (PCE) deflator – the Fed’s preferred indicator – was up 5.2% in January, the fastest rate in nearly 40 years. While a bit lower than the 6% increase in the core CPI, it is still a lot higher than the Fed would like. Monetary policy works with a lag and rate hikes this year will not do much to reduce inflation until next year. In the meantime, a lot has to go right to slow inflation’s roll. This increases the urgency to raise rates now or risk unmouring expectations and having to hurt the economy more later in order to rein them back in.

One piece of good news this week was a solid rebound in consumer spending in January (Chart 2). The rebound was driven by durable goods, led by spending on vehicles. Spending on close contact services weakened, showing the impact of consumer caution as Covid cases rose. We expect these categories to rebound in February and March, with the high-frequency data already showing that consumers are returning to restaurants and air travel. 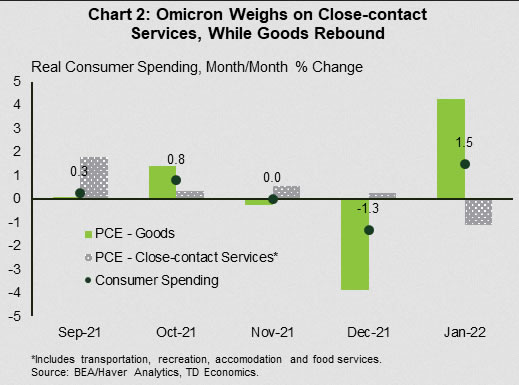 The Russian invasion of Ukraine drove financial market developments this week. Equity indexes have been volatile, but generally dour, with the S&P 500 and the TSX down more than 10% and 4% from their 2022 peaks, respectively (Chart 1).

The biggest moves, however, have been in commodity markets, where sanctions are expected to tighten already strained supplies. Brent and WTI oil prices rose aggressively on Thursday morning, briefly exceeding $100 a barrel (Chart 2). Prices have since come down from their peaks. 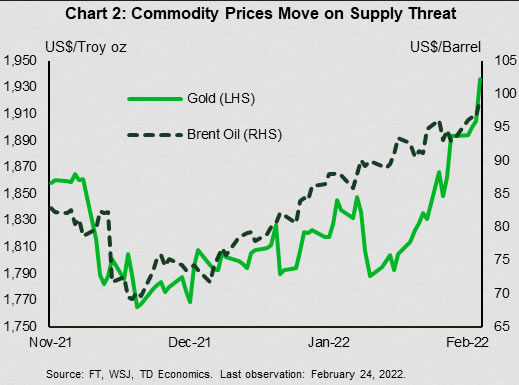 Higher energy prices are a nuanced issue in Canada. On the one hand, they benefit producers and aid government finances (as we just saw with the Alberta budget yesterday). On the other hand, higher prices are akin to a tax on Canadian consumers who have already seen gasoline prices jump over 30% since last year. Prices at the pump have continued to hit consumers’ wallets through February, having risen more than 10 cents a liter in less than a month.

It is not just energy prices. Russia is a major producer of metals, such as gold and nickel, as well as lumber and agricultural products, such as wheat and potash. Canada is not much of an importer of Russian goods, but the potential for less supply is pressuring global commodity prices. This helps Canadian producers, but worsens inflation. Like energy, food price inflation is already a pain point. The price of food purchased at grocery stores was up around 6% year-on-year in January.
Chart 2 shows the price of WTI oil and gold from Nov. 2021 to Feb. 2022. Both oil and gold have been increasing from late-2021.

This sets up for an interesting Bank of Canada (BoC) meeting next week. It is still widely expected that the Bank will hike its policy rate on Wednesday by 25 basis points. Though we don’t know the magnitude or duration of the geopolitical strife, the BoC is unlikely to waver on its mission of bringing down inflation. As such, we have the Bank continuing with rate hikes over 2022, with the policy rate reaching 1.75% over the next year. So far, markets are thinking the same, with the Canada 2-year and 10-year yield still sitting above 1.5% and 1.9%, respectively.

The Bank of Canada will also have some solid economic data to look to before it makes its decision next week. On Tuesday, Statistics Canada will publish GDP data for the fourth quarter of 2021. We are expecting this to come in at a robust 6.8% (q/q annualized). This would confirm the Bank’s view that the Canadian economy has fully eliminated the excess slack caused by the pandemic.

Unfortunately, the first quarter of 2022 isn’t fairing as well. Strict lockdowns curtailed economic momentum. Our tracking for first quarter real GDP growth is barely above zero. The invasion of Ukraine complicates things further, as any forthcoming hit to sentiment could add to the current quarter’s weakness. Here’s hoping for a rapid and peaceful resolution to the conflict.