The financial markets should have completed the first climax reaction to Russia to Ukraine. Both oil prices and gold spiked higher initially last week but pulled back since then. Stocks, in particular major European indexes, also staged a strong rebound after initial dive. Global benchmark treasury yields also rebounded.

In the currency markets, Euro also attempted for a rebound, but was apparently capped. The common currency has indeed closed lower again Dollar and Canadian, which were the strongest two. The greenback was lifted by rise in yields, risk aversion, and expectation of Fed hike. Loonie was strongly support by stellar job data which reinforces BoC’s tightening. On the other hand, Yen closed as the weakest one on divergence in monetary policy with others. Swiss Franc was the second weakest, but Sterling was not too far away.

With upside breakout in USD/JPY, there is prospect of more rally in Dollar and selloff in Yen ahead. Meanwhile, European majors would likely stay under pressure, with a question on whether the tide of Swiss Franc is turning. Aussie and Loonie could be mixed overall until there is drastic moves in commodity prices again.

Nevertheless, firm break of 4416.78 (corresponding level at 34719.07 in DOW and 13837.58 in NASDAQ), SPX should stage an interim rebound as the second leg of the corrective pattern from 4818.62. It should then be followed by another falling leg to completion the pattern. 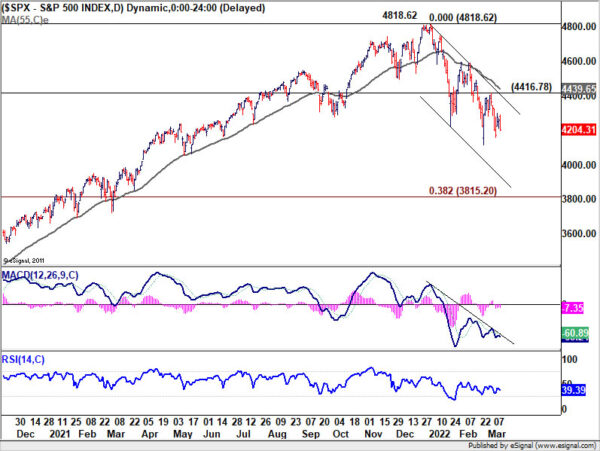 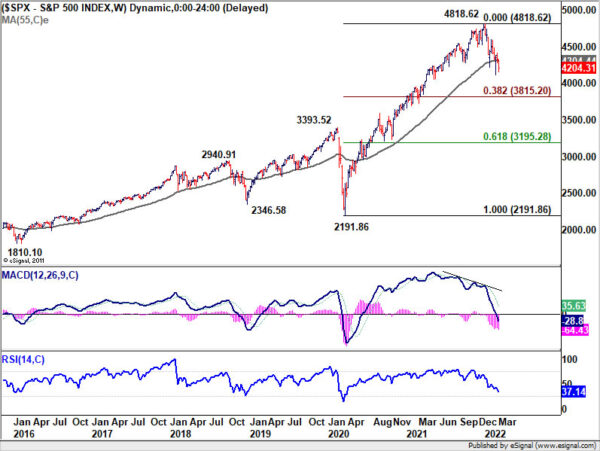 10-year yield’s strong rebound last week suggests that pull back from 2.065, while slightly deeper than expected, has completed at 1.682. The development keeps near term outlook bullish. 2.065 resistance will be in focus very soon and firm break there will resume larger up trend from 0.398.

However, strong break of 2.159/2.187 will suggest some dramatic underlying development. In such case, coupled with extending risk aversion, the greenback could be given a strong, sustainable boost. 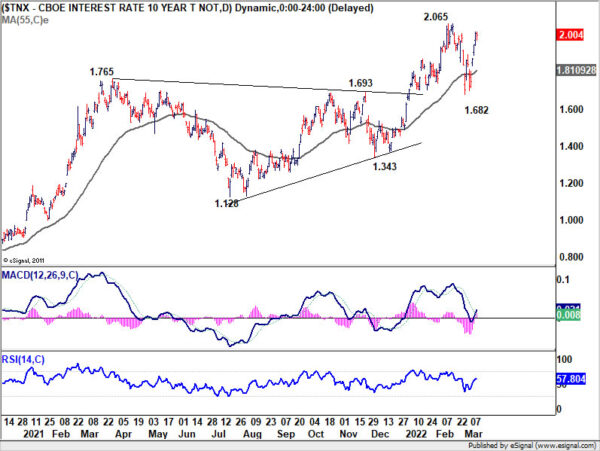 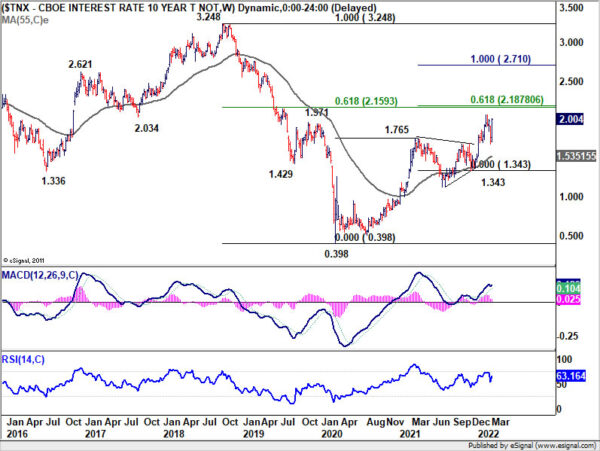 Talking about Dollar, the next focus will be FOMC rate decision. Traders are now pretty sure that there will only be a 25bps hike in federal funds rate to 0.25%-0.50% this week. Fed funds futures are pricing in 94.9% chance of that, with the 5.1% chance for Fed to be on hold. 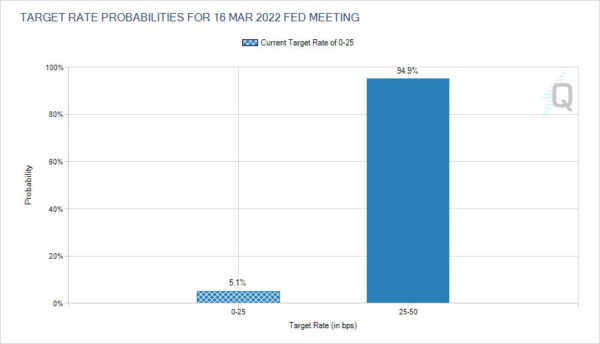 Dollar index retreated after hitting 99.41 last week, but stayed well above 96.93 resistance turned support. Near term outlook remains clearly bullish for further rally. In a less long term bullish case, DXY’s rise from 89.20 is just a leg inside the sideway pattern from 103.82 (2017 high). Further rise should be seen to test 102.99 resistance before topping.

Overall, the power of the next rally through 99.41 would depend on a couple of inter-related factors, including risk sentiment, treasury yields, and Fed’s new economic projections. 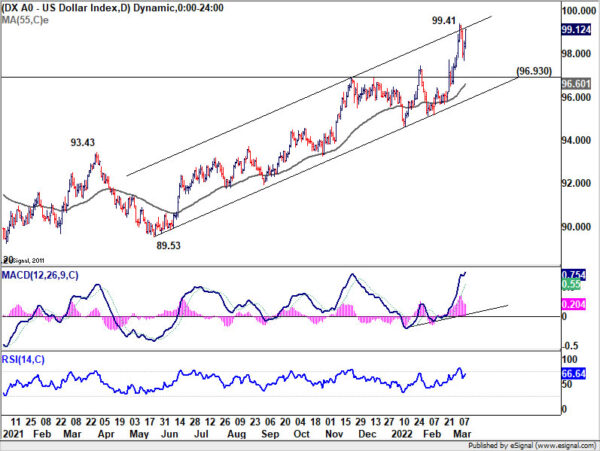 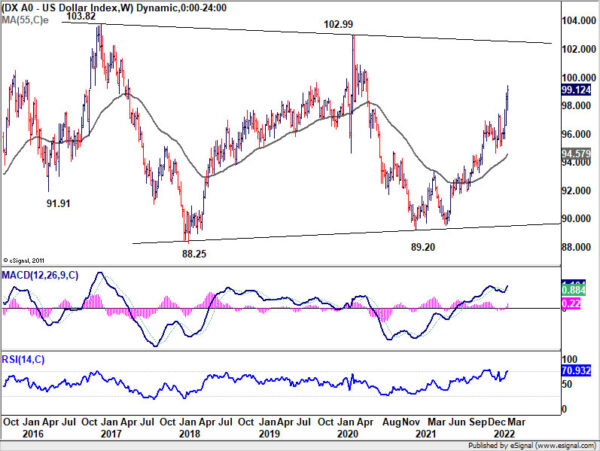 Talking about rate hikes, BoE is also expected to raise interest rate again by 25bps to 0.75% this week. However, such expectation, together with recent strong data, provided little boost to Sterling. The Pound is apparently still weighed heavily down by uncertainty over Russia invasion of Ukraine. 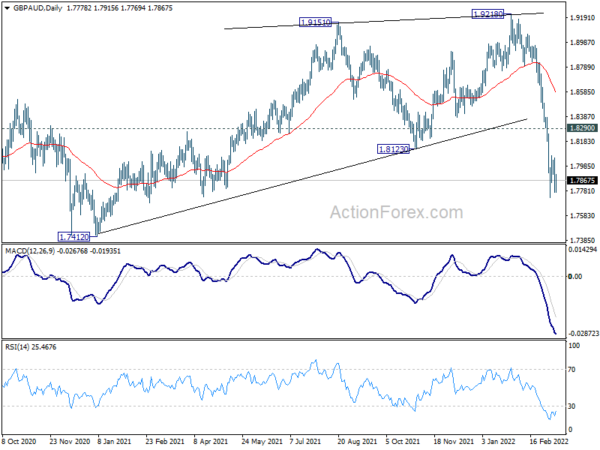 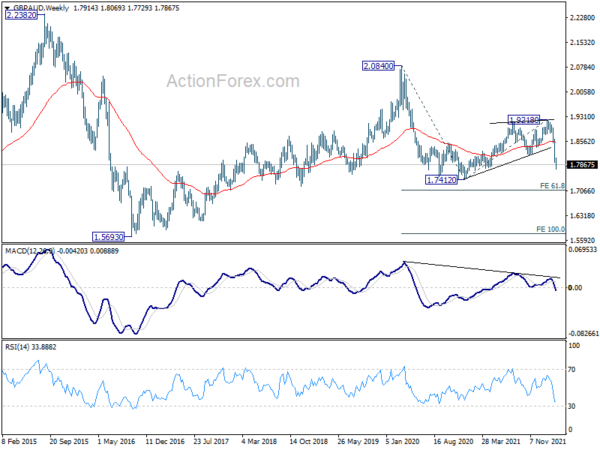 Euro attempted a rebound last week but quickly faltered despite a hawkish shift in ECB. On the other hand, Canadian Dollar was boosted by stellar job report which solidify more tightening from BoC ahead. 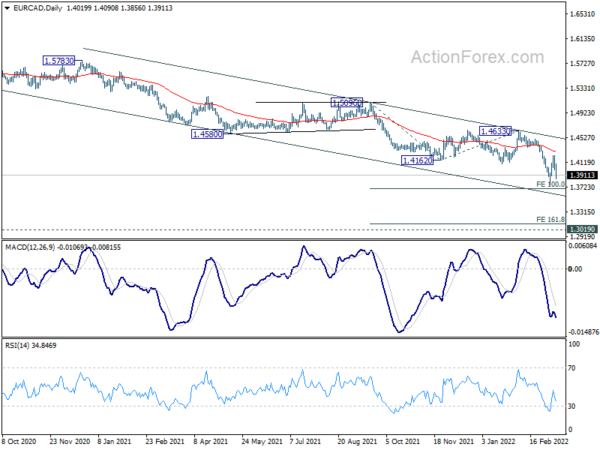 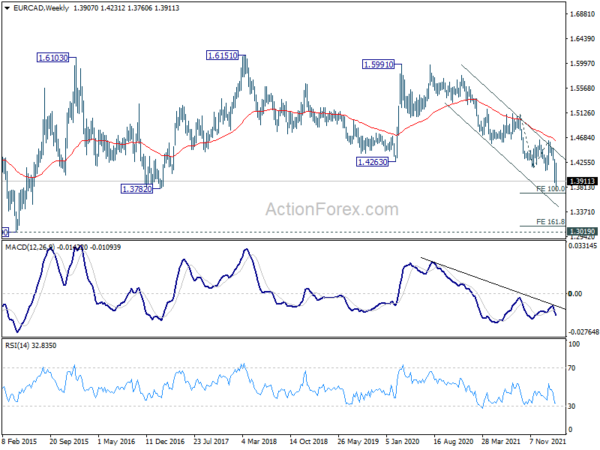 WTI oil and Gold in near term pull back after spikes

Finally, both WTI crude oil and Gold retreated notably after initial spikes last week. Such pull-backs are so far seen as knee-jerk reaction after passing initial buying climax. The stages for sizeable correction are not set yet. 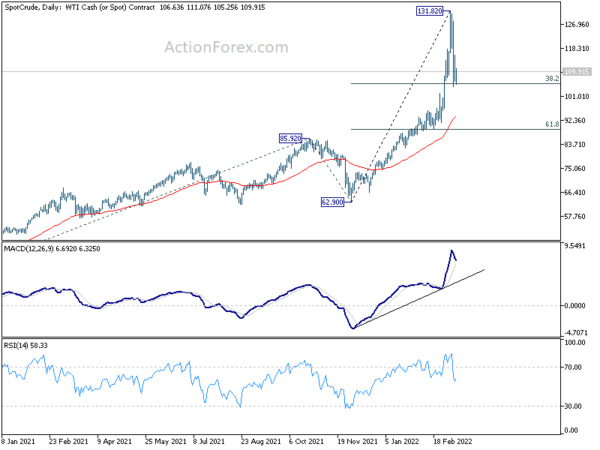 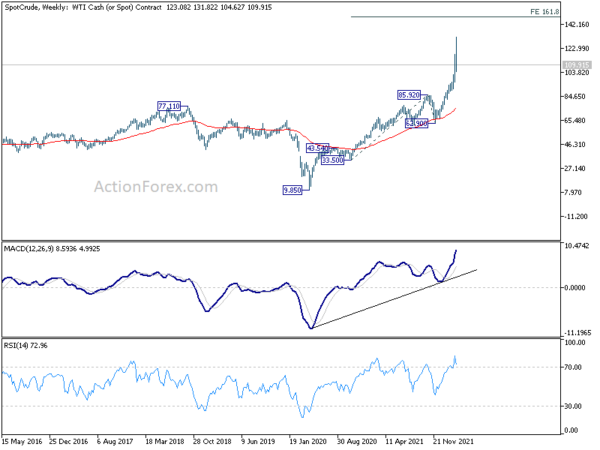 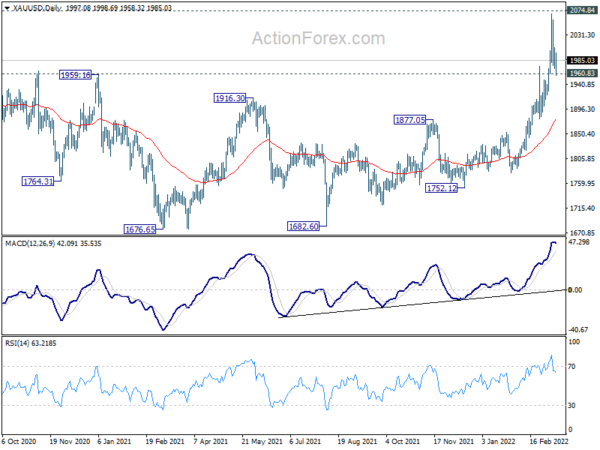 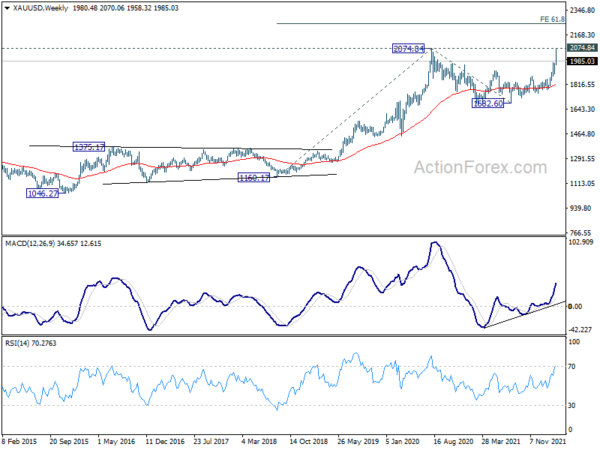 USD/JPY’s strong break of 116.34 resistance confirms resumption of whole up trend from 102.58. Initial bias stays on the upside this week. Next target is 118.65 long term resistance. On the downside, below 116.73 minor support will turn intraday bias neutral and bring consolidation first, before staging another rally. 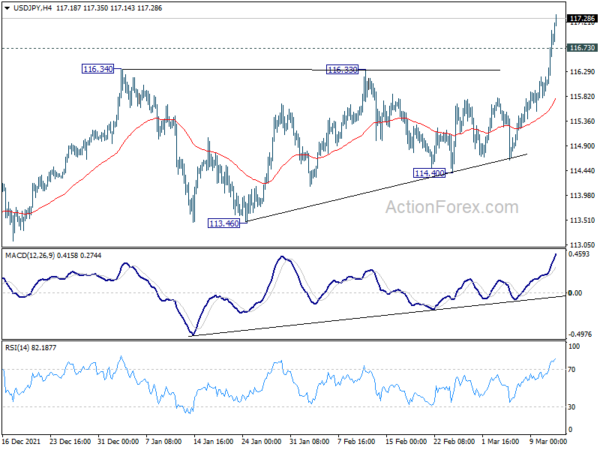 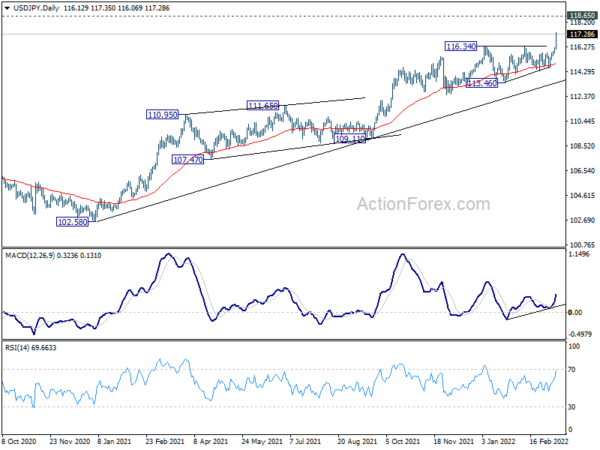 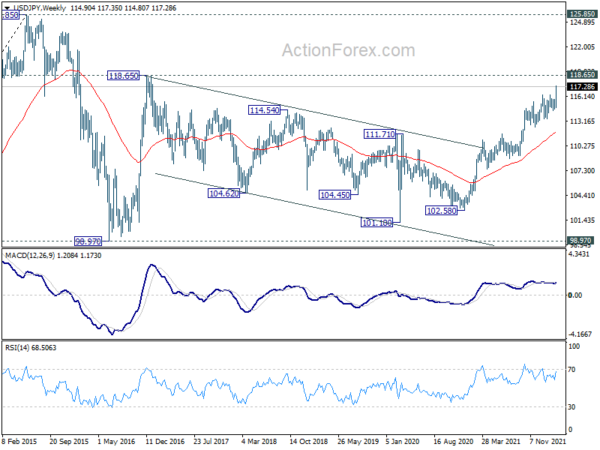 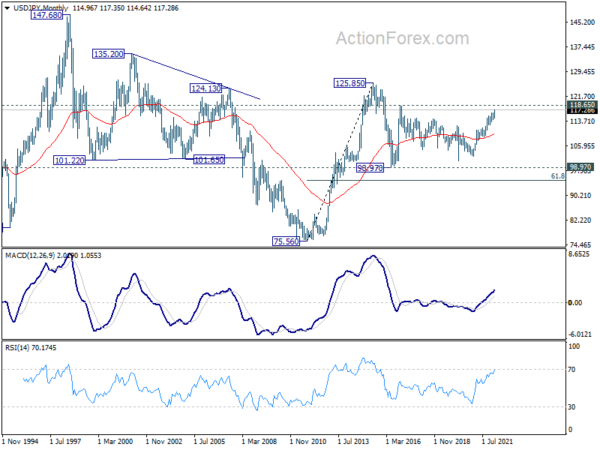