Dollar Extending Rally Against Yen, Fed and BoE to Hike this Week

Dollar is lifted by risk aversion sentiment in Hong Kong and China in Asian session today. The greenback’s strength is particularly apparent against Yen, Aussie and Kiwi. Euro is trying to recover against others but such recovery remains weak. The uncertainty over Russia invasion of Ukraine will continue to cap Euro’s rebound. The economic calendar is rather empty today, but volatility is guaranteed ahead with FOMC and BoE rate hikes scheduled.

A question in mind is whether commodity currencies could pick up buying again, and extend the rally started since war. Technically, NZD/USD’s near term pull back from 0.6924 should complete soon, followed by a break through 0.6924 resistance in the next few days. That is, downside should be very limited even though it may have another dip. However, downside acceleration with break of 0.6736 support turned resistance will argue that the near term tide has reversed, which could also be reflected in Aussie’s movements. 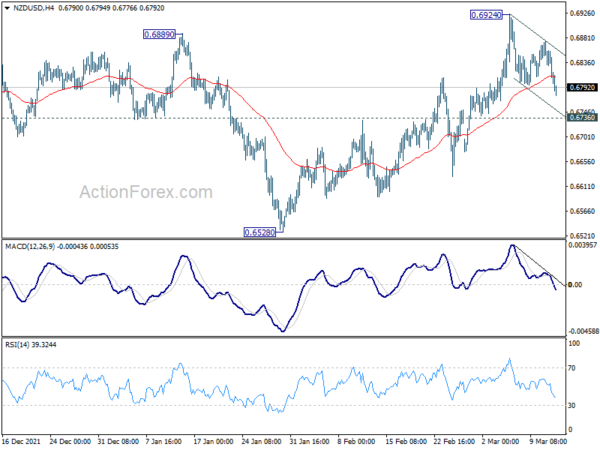 Stocks in Hong Kong and China are in selloff mode again today while other parts of Asia are mixed. A batch of factors are weighing on sentiments. The Financial Times and Washington Post reported on Sunday that Russia has asked China for help on military equipment for its invasion of Ukraine. But the spokesperson for China’s embassy in Washington said he’s “never heard of that”.

Separately, fresh lockdown was announced in China’s key technology hub in Shenzhen. Last week, the US SEC named its first batch of Chinese stocks as part of a crackdown on foreign firms that refuse to open their books to U.S. regulators. Didi Global suspended its listing in HK after failing to appease the Chinese government’s regulatory demands.

At the time of writing, Hong Kong HSI is down -3.81%, or -782.32 pts for the day, breaking through 20k psychological level. Near term outlook will stay bearish as long as the bottom of the gap last week holds, at 21321.79. However, downside might be “relatively limited” as it will enter into a long term support zone between 18278.80 (2016 low), and lower channel support. Also, both daily and weekly RSI are clearly in deep oversold region. 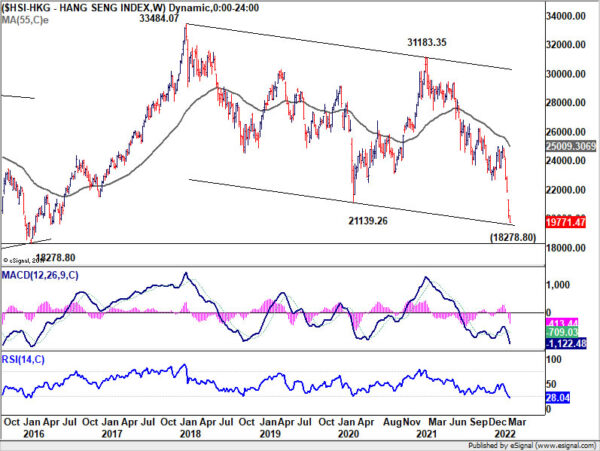 Ethereum and Bitcoin extending triangle consolidation, not the time for downside breakout yet

Ethereum is struggling in tight range above 2500 in quiet Asian session. It’s staying in the consolidation pattern from 2157, probably in form of a triangle. That is another rising leg could be seen as before the consolidation completes. But judging from current price actions, upside should be limited by 55 day EMA (now at 2852).

The whole down trend from 4863 is expected resume later. Break of 2293 support will be the first sign of downtrend resumption. Further break of 2157 low will pave the way through 2000 to 1715 support next. 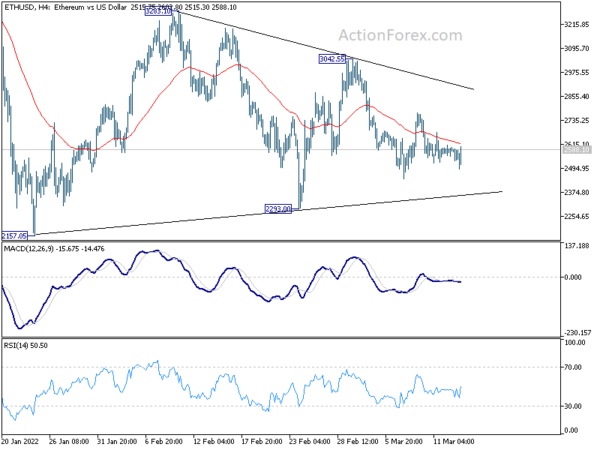 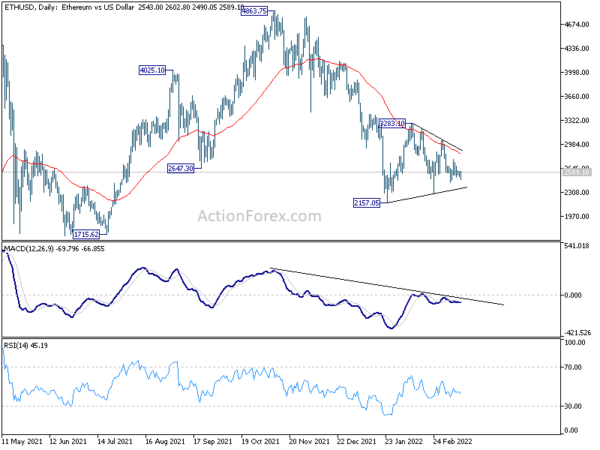 Bitcoin carries the same picture. It’s trading in range around 38000 for now. Overall, it’s seen as extending the triangle consolidation pattern from 33000. Such pattern should complete after another rising leg. Break of 34264 will be the first sign of resumption of down trend from 68986. Further break of 33000 will target 29261 support next. 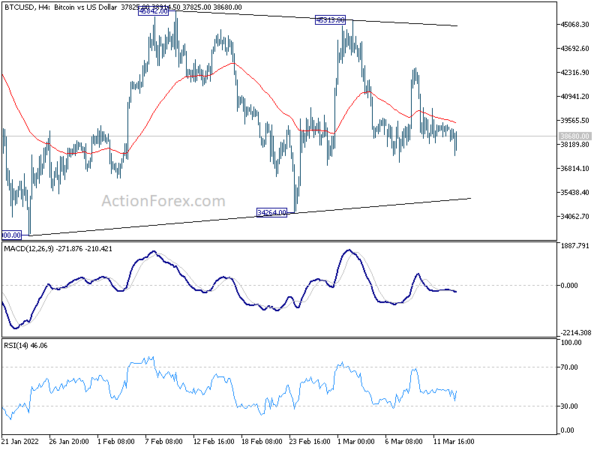 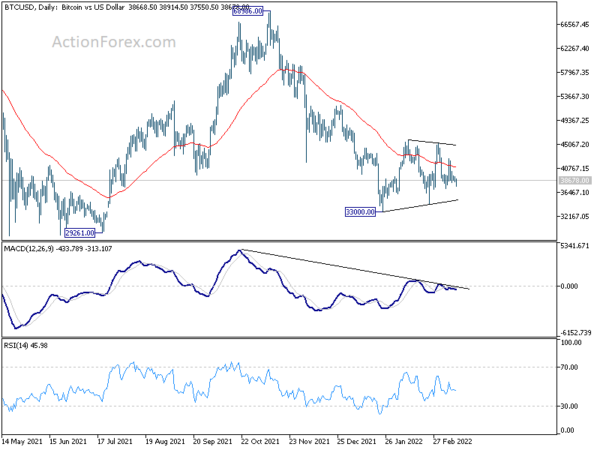 Fed and BoE to hike, BoJ to stand pat

Three central banks will meet this week. Fed is now expected lift interest rate by 25bps only to 0.25-0.50%. That, nonetheless, still mark the start of a tightening cycle. Fed Chair Jerome Powell would continue to sound hawkish but non-committal. The numbers, in the new economic projections and dot plot, would speak a louder message.

BoE is also expected to raise interest rate again by 25bps to 0.75%. Last time, the 25bps hike was made by a marginal 5-4 votes, beating hawks that voted for a 50bps hike. The main question this time is how many MPC members will vote for a 50bps again.

BoJ is expected to keep monetary policy unchanged. Governor Haruhiko Kuroda has repeatedly point to sluggish wage growth. Even though core inflation might hit 2% target briefly, there is no case for tightening yet.

On the data front, Canada CPI and retail sales could be most market moving. US retail sales, UK employment , Germany ZEW, will be featured. China will also release retail sales and industrial production. Here are some highlights for the week:

Intraday bias in USD/JPY remains on the upside at this point. Current up trend from 102.58 should target 118.65 long term resistance next. On the downside, below 117.23 minor support will turn intraday bias neutral and bring consolidation first. But retreat should be contained by 116.34 resistance turned support to bring another rally. 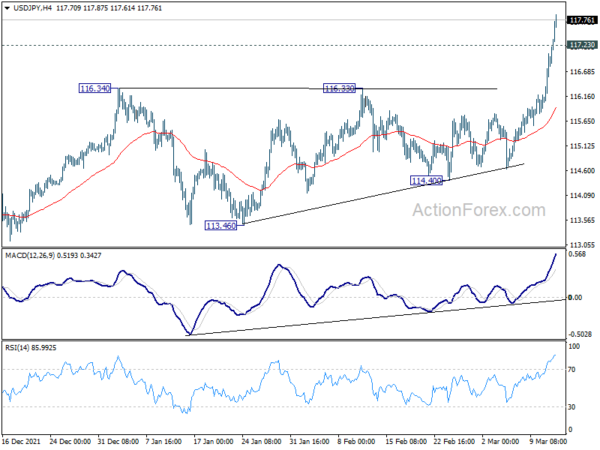 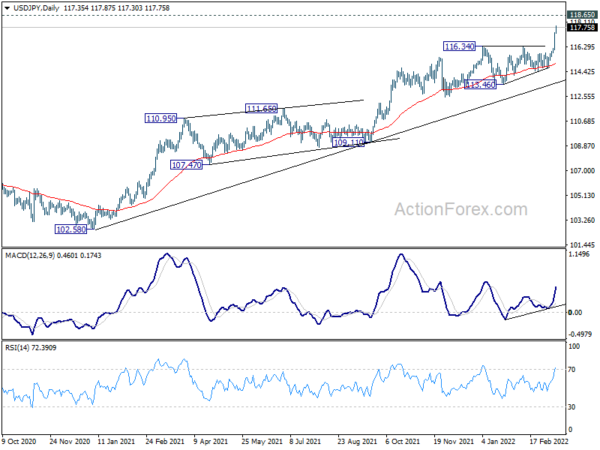