GBPJPY is Back to Gains; Broader Outlook is Bullish

GBPJPY is gaining some ground again after three consecutive red days with the technical indicators endorsing this view. The RSI is heading up in the positive region and the MACD is looking highly elevated above its trigger and zero lines. However, the stochastic is approaching the oversold zone indicating that the next move would be to the downside.

Should an upside reversal take form, immediate resistance will likely come from the 163.90 mark, while a break higher it could meet the six-year high of 164.62. Surpassing these levels could shift the bias to a bullish one, visiting the 168.10 resistance, taken from the peak in October 2014.

If prices head lower, support should come from the 158.20 support, which was a significant barrier in the past before the jump on March 22. A drop below this level would reinforce the short-term bearish view and open the way towards the 20- and 40-day simple moving averages (SMAs) currently at 156.85 and 156.05 respectively. Even lower the flat 200-day SMA at 153.60 may halt the negative movements.

All in all, GBPJPY has turned the broader outlook from neutral to positive after the increase above 158.20. 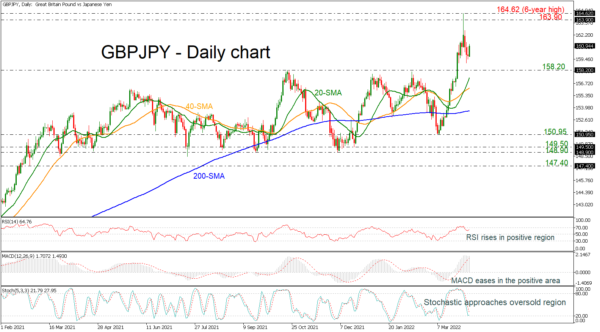