USDCAD Rebounds Off 1.2450 But Remains Below Uptrend Line

USDCAD has been heading south over the last two weeks, reaching the 50.0% Fibonacci retracement level of the up leg from 1.2000 to 1.2960 at 1.2482. The price also declined beneath the long-term uptrend line and the 200-day simple moving average (SMA) but has found support at the 1.2450 barrier over the last couple of days.

In trend indicators, the 20- and 40-day SMAs completed a bearish crossover, confirming the bearish view in the near term. The MACD oscillator is trying to overcome its trigger line, remaining below the zero line. The RSI is holding in the negative territory but is showing some optimism for a positive move.

A move to the upside could see immediate resistance at the 38.2% Fibonacci of 1.2595 and the 200-day SMA at 1.2614 but should the market increase positive momentum above this area, the 40-day SMA at 1.2678 could be the next level in focus. A stronger barrier, though, could be found at the 23.6% Fibonacci of 1.2734 since any strong violation of this point could increase chances for further gains, probably towards the previous peak of 1.2875.

In case of more negative pressures, the market could meet support at the 1.2450 barrier before it moves lower to the 61.8% Fibonacci of 1.2370. A successful close below this level could see a retest of the previous low of 1.2285, while in case of steeper declines, the pair could breach this trough, diving to the 1.2145 level.

Turning to the short-term picture, the market seems to be in a bearish mode given that the price is trading below the 200-day SMA. Any advances back above the downtrend line, there is hope that the market could return to the bullish phase. 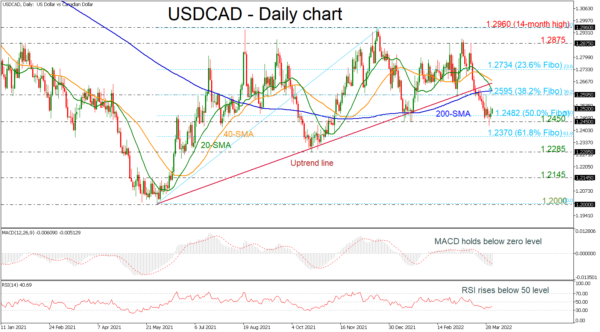