AUDUSD is resting on the 0.7531-0.7555 support band that includes the mid-Bollinger band after retreating from its nine-and-a-half-month high of 0.7661. The advancing simple moving averages (SMAs) are endorsing the uptrend that began at the beginning of February.

Meanwhile, the short-term oscillators currently suggest that positive drive is evaporating. The MACD, in the positive section, is weakening beneath its red trigger line, while the RSI is falling towards the 50 threshold. That said, the stochastic lines are in oversold territory, backing a negative price narrative, but the flattening of the %K line is hinting that sellers are struggling to stay in control.

In the negative scenario, sellers face immediate downside constraints from the 0.7531-0.7555 zone. However, should this upside defence give way and the bears drive the pair past the 50-period SMA lingering beneath at 0.7521, the spotlight could then shine on the crucial 0.7440-0.7470 support border that also encapsulates the lower Bollinger band and the 100-period SMA. Sinking underneath this key region may reinforce negative tendencies, shifting the responsibility towards the 0.7356-0.7375 boundary to safeguard the positive structure.

Summarizing, AUDUSD’s uptrend remains intact above the 0.7440-0.7470 support border. A dip in the price beneath the 50-period SMA could throw into question the credibility of the positive structure. 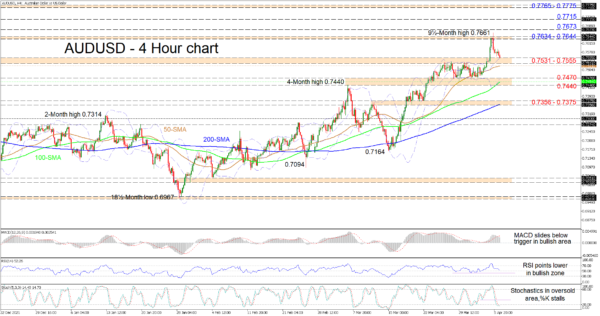