Dollar was initially mixed last week but buyers jumped in after FOMC minutes revealed the quantitative tightening plan. US benchmark treasury yields also surged to highest level since 2019. Both Canadian and Australian Dollars followed as second and third strongest. Aussie was boosted by RBA’s hints on earlier rate hike while Loonie was supported by strong job data.

While ECB delivered a hawkish twist in the meeting minutes, Euro ended as the worst performer as the Ukraine war dragged on. Yen was the next weakest, and continued its inverse relationship with global benchmark yields. Sterling and Swiss Franc were mixed.

US 10-year yield jumped as Fed laid out QT plan

US 10-year yield surged sharply last week to close at 2.713%, highest since March 2019. Yield curve also steepened somewhat, with 2-yield yield closing at 2.466%. But 5-year yield, closing at 2.756%, was higher than 10-year yield. The moves were in reaction to March FOMC minutes, which laid down a plan of USD 95B per month balance sheet runoff, (USD 60B in treasury securities and USD 35B in MBS holdings). The so-called quantitative tightening should start in May.

More importantly, further rise would confirm the break of a multi-decade channel resistance as seen in the monthly chart. Such development could mark the start of a near era, of finally a long term trend of rising treasury yield and interest rates, probably accompanied by persistently strong inflation. If this happens, the next focus will be 3.248 level (2018 high). 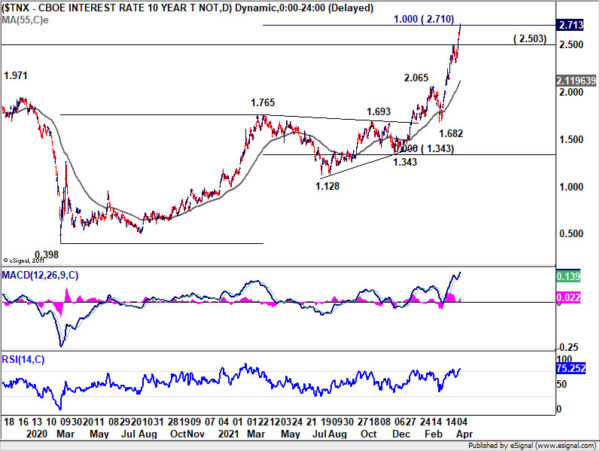 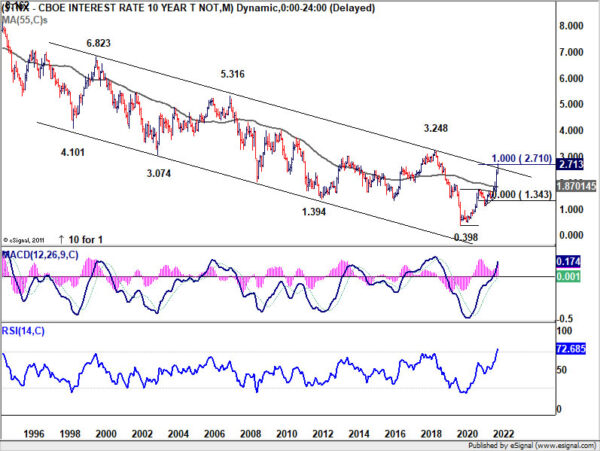 Dollar index resumed its medium term up trend last week, but failed to close above 100 handle. Still, outlook will remain bullish as long as 97.68 support holds. The question is whether DXY could break through 100 with some conviction at next attempt. Also, sustained break of the medium term channel resistance could be a sign of upside acceleration.

Overall, the rise from 89.20 is taken as a leg inside the long term consolidative pattern from 103.82 (now at 2017 high). Hence, some focuses will be on topping signal as DXY approaches 103.82. However, if TNX could break through 3% handle and set its eye on above mentioned 3.248 resistance, DXY could be given the needed fuel to have a genuine challenge 103.82, or even break through it. 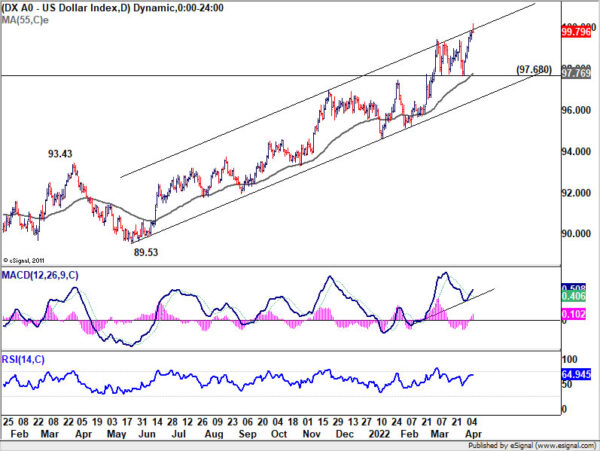 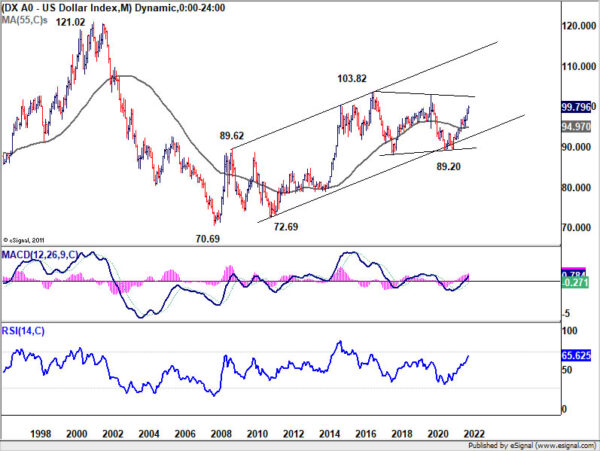 The minutes of ECB’s March meeting turned out to be more hawkish than expected, with some members argued in favor of putting a firm end date to asset purchases. Comments from some Governing Council members also indicated their getting more concerned with persistently high inflation.

There are some expectations that ECB would deliver and announce to conclude the APP in this week’s meeting. It would maintain that adjustment in interest rate would come “some time” after that, while President Christine Lagarde will reiterate the importance of graduality, flexibility and optionality. Still, there are some speculations that tightening cycle would come in September, followed by another hike before the end of the year.

Yet, the hawkish twist in ECB provided little support to Euro. Firstly, ECB is still going to lag behind other major central banks in tightening. Secondly, the ongoing impact of Russia invasion of Ukraine remains highly uncertain.

EUR/CHF gyrated lower last week but lost momentum after dipping to 1.0129. The structure of the fall from 1.0400 doesn’t warrant down trend resumption. But further decline will remain in favor as long as 1.0242 minor resistance holds. Break of 1.0129 will put EUR/CHF back on track to retest 0.9970 low. Nevertheless, break of 1.0242 minor resistance will likely revive some near term bullishness, and resume the rebound from 0.9970 through 1.0400 resistance. 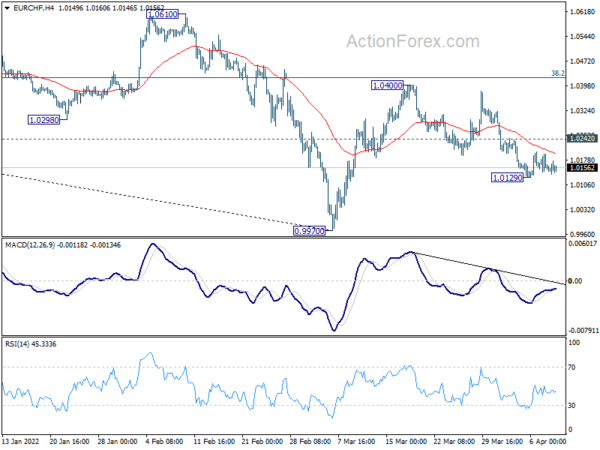 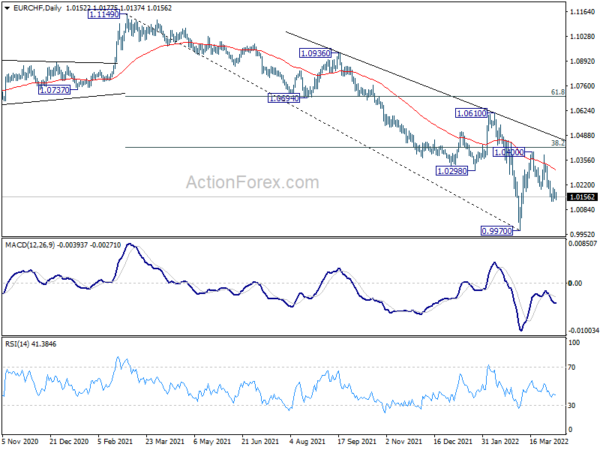 Aussie was boosted higher last week after RBA abandoned its “patient” stance. The change in language is seen as an indication of pull ahead the first rate hike, probably to June meeting. Still RBA is lagging behind both BoC and RBNZ. Indeed, both the Canadian and New Zealand central banks are expected to continue with their tightening cycle this week. BoC is even expected to raise interest rate by 50bps, after recent strong inflation and job numbers. 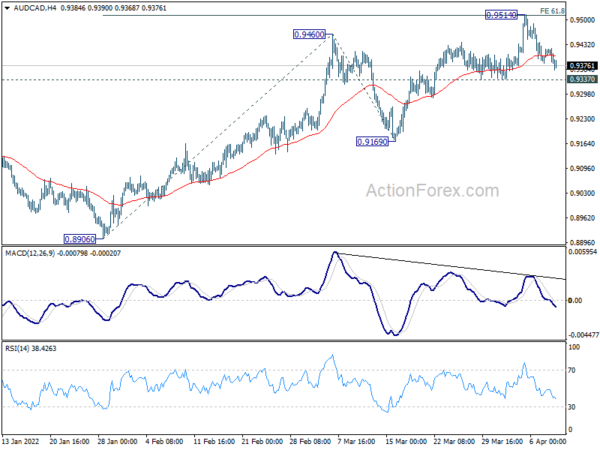 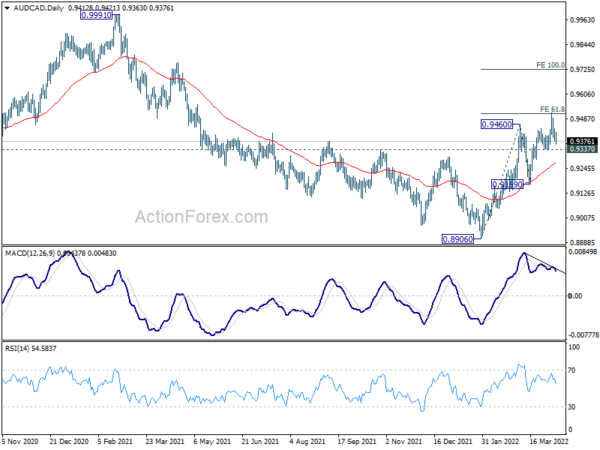 Bitcoin’s fall from 48226 extended lower last week and closed below 55 day EMA (now at 43005). The development raises the chance that recovery from 33000 is merely a corrective pattern, that’s even completed with three waves up to 48226. If bitcoin cannot move back and sustain above 55 day EMA soon, risk will be on the downside. Further break of 37550 support will argue that the down trend from 68986 is ready to resume through 33000 low. 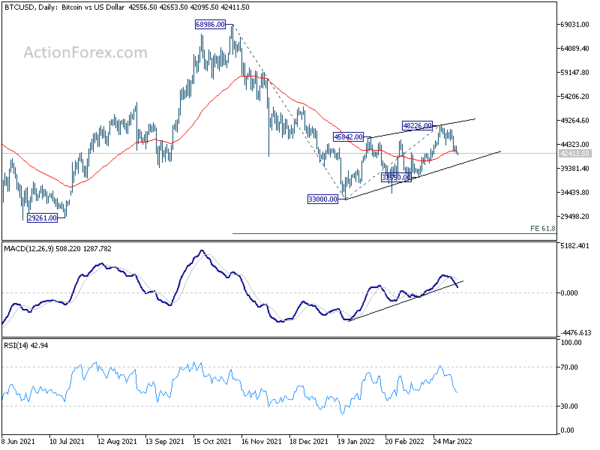 USD/JPY’s rebound from 121.27 extended higher last week but upside was capped below 125.09 resistance. Initial bias remains neutral this week first. On the upside, firm break of 125.09 will resume larger up trend from 102.58. Further break of 125.85 long term resistance will pave the way to 130.04 long term projection level. Consolidation from 125.09 could still extend with another falling leg. But overall outlook will remain bullish as long as 121.17 support holds. 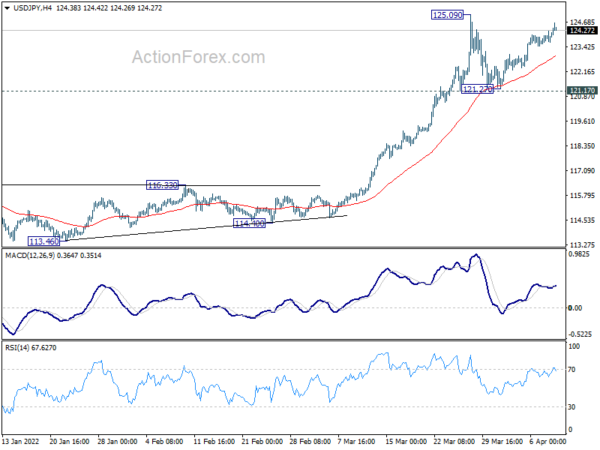 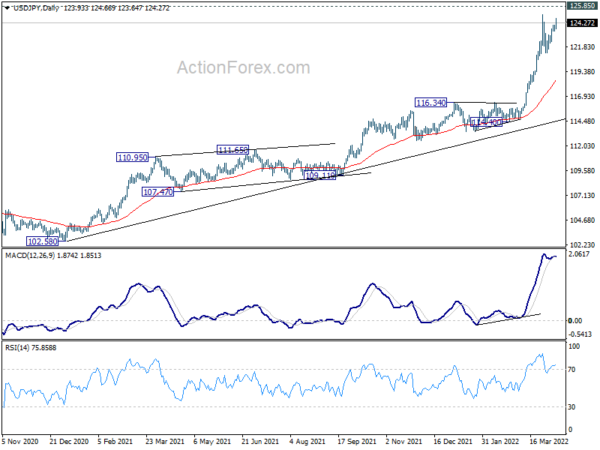 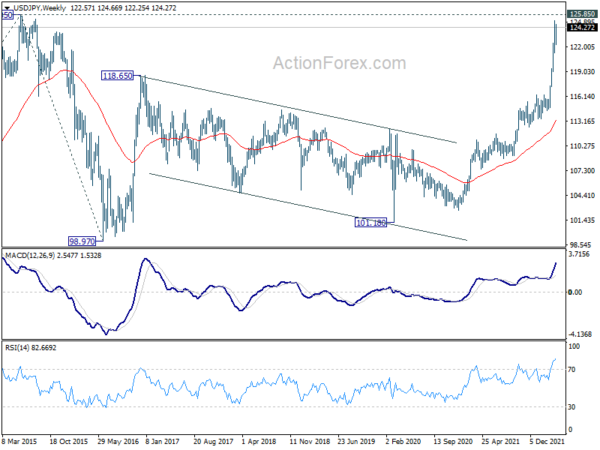 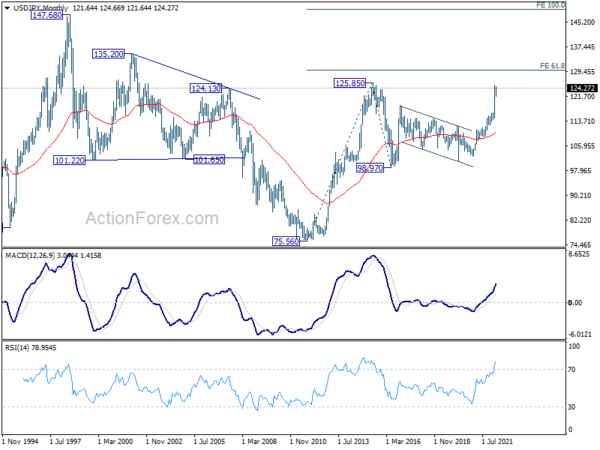