Yen is trading broadly lower in Asian session today. But commodity currencies are also soft on mild risk-off sentiment. On the other hand, Euro and Dollar are the stronger ones, while Sterling and Swiss Franc follow. UK data will be the main focus in European session while US calendar is empty. Nevertheless, more volatility is guaranteed ahead with three major central banks featured, including RBNZ, BoC and ECB, plus lots of important data.

Technically, immediate focus is on 125.09 resistance in USD/JPY. Firm break there will resume larger up trend to 125.85 long term resistance (2015 high). The question is whether that would help take EUR/JPY through 137.50 resistance, or push EUR/USD through 1.0805 support.

BoJ Governor Haruhiko Kuroda said in the quarterly branch manager meeting, “Japan’s economy has picked up as a trend, although some weakness has been seen in part, mainly due to the impact of COVID-19.”

“As downward pressure on service consumption and the impact of supply shortages diminish, a pickup in overseas demand, accommodative monetary policy, and the government’s economic stimulus will likely help the Japanese economy recover despite being affected by rising commodity prices,” he added.

Kuroda also cautioned that “extremely high uncertainties” remain over how the crisis in Ukraine will impact commodity prices and the Japanese economy. But he also indicated that commodity inflation is unlikely to trigger a change in the central bank’s ultra-loose policy, because it wouldn’t last long.

China PPI slowed from 8.8% yoy to 8.3% yoy, but still beat expectation of 7.9% yoy. However, the monthly rise of 1.1% mom in PPI was the fastest in five months, driven by surges in oil prices and non-ferrous metals.

CPI accelerated from 0.9% yoy to 1.5% yoy in March, above expectation of 1.2% yoy. Core CPI, excluding food and energy, rose 1.1% yoy, unchanged from February’s reading. Prices of some food like flour, vegetable oil, fresh vegetables and eggs rose and were “affected by the rise in international prices of wheat, corn and soybeans and the domestic [coronavirus] outbreaks”, noted senior NBS statistician Dong Lijuan.

Three central banks will meet this week. RBNZ will come first and it’s expected to raise the Official Cash Rate by another 25bps to 1.25%. A 50bps hike cannot be totally ruled out, but RBNZ would more likely wait for the May Monetary Policy Statement to make the case for a bigger move, if needed.

BoC is expected to raise the Overnight Rate for the second straight month, and by a larger amount of 50bps to 1.00%. The central bank should also indicate that more tightening ahead, to “forcefully” press inflation back to target. A question is on when BoC would start quantitative tightening, and shrink the balance sheet. Some indications, or even actions, on the balance sheet could move the markets.

ECB is not expected to announce any change to monetary policy this week. But in light of recent developments in inflation, the central bank is expected to announce a firm end to the asset purchases after June. The statement would maintain that adjustment in interest rate would come “some time” after that. President Christine Lagarde will reiterate the importance of graduality, flexibility and optionality. There are some speculations that tightening cycle would come in September, followed by another hike before the end of the year. But Lagarde will certainly remain non-committal to any future decisions.

The economic calendar is also extremely busy on data releases in a holiday shortened week. US CPI and retail sales will catch much attention. A wave of UK data, including GDP, employment and inflation is equally important. Germany ZEW economic sentiment, Australia employment will also be closely watched.

Focus is now on 125.09 resistance in USD/JPY. Firm break there will resume larger up trend from 102.58. Further break of 125.85 long term resistance will pave the way to 130.04 long term projection level. Consolidation from 125.09 could still extend with another falling leg. But overall outlook will remain bullish as long as 121.17 support holds. 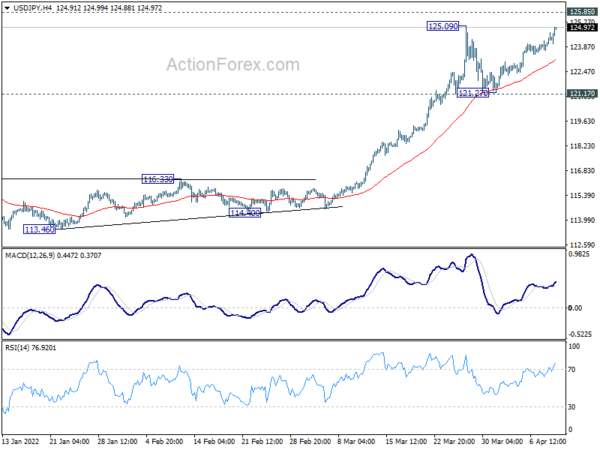 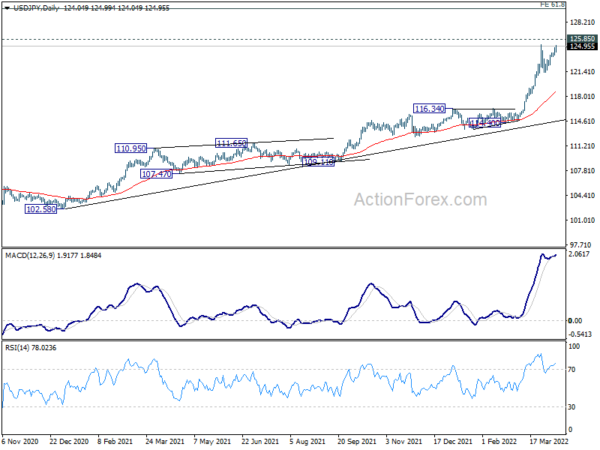