Will the Bank of Canada Opt for a 50-bps Rate Hike at its April Meeting?

The Bank of Canada announces its next monetary policy decision on Wednesday (14:00 GMT) and the odds of a double rate hike are very high. The Canadian economy has been going from strength-to-strength after emerging from the first lockdown in 2020, with a few bumps along the way. Like its southern neighbour, the United States, inflation is too high and the labour market is tightening fast. This gives policymakers little excuse to stay cautious. But how much more hawkish can the BoC get and can the Canadian dollar regain positive momentum, having retreated sharply from five-month highs versus the greenback?

Inflation has jumped to 30-year high

There can be no doubt that Canada’s economy is in pretty good shape right now. Demand for its main export – oil and energy products – is exceptionally strong thanks to the war in Ukraine, consumption is rebounding from the Omicron curbs, the housing market is booming, and the labour market is looking increasingly tight. The unemployment rate plunged to a new post-pandemic low of 5.3% in March.

The side effect of all this of course is that inflation is surging. Canada’s consumer price index stood at a 30-year high of 5.7% year-on-year in February and will likely rise further in the coming months as price pressures from higher energy and commodity prices, as well as from ongoing supply disruptions, are unlikely to fade quickly.

Although the Bank of Canada was the first major central bank to begin exiting its pandemic-era stimulus last year, it only began raising interest rates in March when it lifted the overnight rate by 25 basis points to 0.50%. However, the BoC might be making up for lost time in April as there is growing speculation that policymakers will move more aggressively at the upcoming meetings. 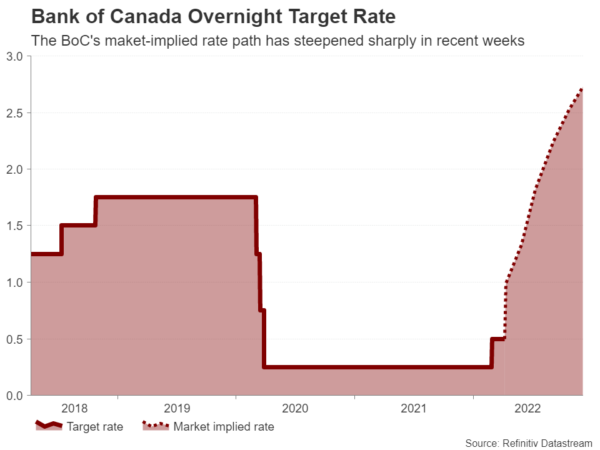 Market pundits have priced in about a 95% probability that the BoC will raise rates by 50 bps in April. That suggests there could be only limited gains for the loonie if the Bank meets those expectations, but the risk for a selloff is high if policymakers disappoint by hiking by just 25 bps.

But more significantly for the local dollar, investors will be seeking clues on the rate path for the rest of the year in the quarterly set of economic projections that are due the same day, as well as in Governor Tiff Macklem’s press conference. Rate hike expectations for December 2022 have shot up to almost 225 bps during March, as the Ukraine crisis unfolded and raw material prices spiralled higher. That implies that aside from the April meeting, the BoC will probably need to increase rates by 50 bps in at least two other meetings this year.

If the Bank signals a nearly as steep a rate path as what investors expect, dollar/loonie could restore its short-term downtrend, to re-test the 50% Fibonacci of the June-December 2021 upleg at 1.2483 before aiming for the 61.8% Fibonacci of 1.2369. Further gains towards the 1.23 level are possible if oil prices recover from their current lows and the Federal Reserve doesn’t make any further hawkish shifts.

Will the BoC shy away from bolder action?

However, if the BoC follows in the footsteps of the Bank of England rather than the Fed and is reluctant to commit itself to a very aggressive tightening cycle, dollar/loonie could extend its latest bounce back. The pair has just climbed towards its 200-day moving average in the 1.26 region. Another attempt higher could be met with resistance at the 50-day moving average not too far higher near 1.2660. Breaking above this barrier would open the way for the psychologically important 1.28 mark.

In the bigger picture, though, it might be difficult for the loonie to break out of its neutral range. Although Canada’s economy isn’t very exposed to Western sanctions against Russia so it is unlikely to suffer much, expectations of a hawkish BoC are being countered by a retreat in oil prices. Even if crude oil were to resume its rally, the elevated geopolitical risks might hold back stronger gains, while the threat of higher inflation squeezing consumers in the future poses another downside risk.