USDJPY has barely been moving so far this week ahead of the FOMC policy announcement, facing strong rejection around the 130.20 barrier.

Although the pair remains close to its recent 20-year top of 131.24, the possibility for a downside correction is technically growing larger as the RSI and the MACD trend southwards, with the former set to exit the overbought territory and the latter gradually sliding below its red signal line.

Nevertheless, how meaningful any pullback could be is still a question. The pair is effectively preserving its bullish trajectory above the tentative ascending trendline currently seen around 129.15, while the 20-day simple moving average (SMA) may also prevent an outlook deterioration below the previous low of 126.93. Note the 23.6% Fibonacci retracement of the 114.64 – 131.24 upleg is also in the neighborhood. Nevertheless, if selling pressures further exacerbate below the flattening blue Kijun-sen line at 126.35 as well, the price may tumble to 125.00.

Summarizing, USDJPY is currently in wait-and-see mode. A step above 130.20 or below 129.15 could direct market sentiment accordingly. 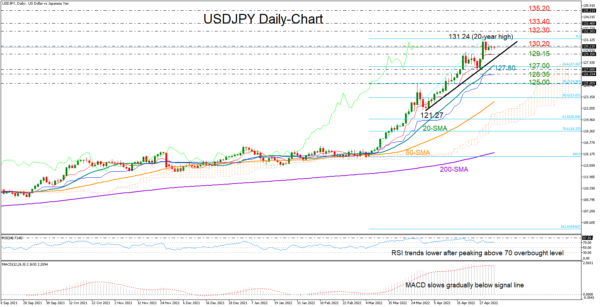