GBPAUD’s recent bullish impetus from the early April 4¼-year low region has run out of steam just beneath the mid-Bollinger band at 1.7468. The longer-term 100- and 200-period simple moving averages (SMAs) are suggesting that the negative bearing has softened, while the downward pointing 50-period SMA is reflecting that buyers have yet to gain the upper hand.

The short-term oscillators are implying that negative momentum has weakened to a degree, but it is difficult for positive sentiment to take hold when the directional picture is tilting to the downside. Currently, the MACD is improving in the negative region over its red trigger line, while the RSI is finding difficulty to reach the 50 threshold. Moreover, the stochastic %K and %D lines are flirting with the 80 level, failing to definitively pilot into overbought territory.

In the negative scenario, a dip back beneath the immediate 1.7350 obstacle could cheer sellers to eye the lower Bollinger band at 1.7228 and the sturdy multi-year bottom of 1.7173. From here, if profound selling interest unfolds, overwhelming the more than four-year trough and the 1.7096-1.7120 support band – moulded by the lows of January 2018 and November 2017 – the bears may snag around the 1.7036 barrier. However, if downside pressures remain heavy, the price could then target the 1.6850-1.6894 key support boundary, which began to take shape back in the last months of 2017.

Otherwise, if the price pushes off the 1.7350 support, resistance could commence from the mid-Bollinger band at 1.7468 before buyers challenge the tough resistance section between the 1.7542 obstacle and the 100-period SMA at 1.7604. Conquering this hurdle, the bulls may then aim for the falling upper Bollinger band at 1.7688 prior to shifting their focus toward the 1.7834-1.7886 resistance ceiling, involving the now highs of April and May.

Summarizing, GBPAUD is sustaining a neutral-to-bearish bias beneath the 1.7834-1.7886 boundary. A dive in the pair below 1.7173, which extends past the 1.7096-1.7120 obstacle, could upgrade negative momentum. Yet, for a positive vibe to begin to return, the price would need to initially climb above the converged SMAs. 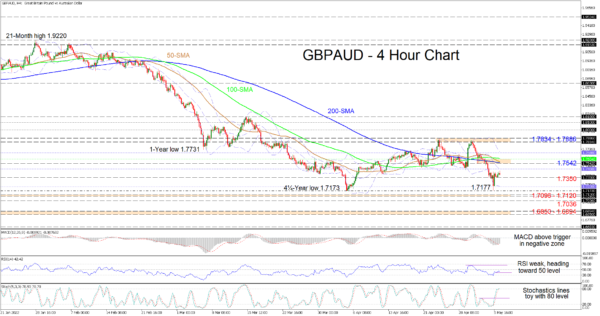