The Weekly Bottom Line: Bank of Canada Still on Track for Rate Hike

Economic developments for the week point to a U.S. economy that is in transition. As policymakers try to steer the economy from the current high inflation environment, they must walk a tightrope so as not to inflict too much damage on growth. The second estimate of first quarter GDP suggests that it is indeed a delicate balance that will have to be struck. The economy is now estimated to have contracted by 1.5% through the first three months of 2022, slightly lower than the 1.4% previously reported . The revision mainly reflected lower investment in inventory. On the upside, consumer spending and business investment continued to show strong domestic demand.

On that front, orders for durable goods decelerated in April to 0.4% month-on-month (m/m), from a downwardly revised 0.6% in March. Core capital goods orders, a closely watched proxy for business investment, rose 0.3%. The report suggests that business investment growth is starting to taper as interest rates rise. Manufacturers however have a substantial backlog of orders to fulfill, which should continue to support investment in the near term.

The Fed’s mission to tame inflation is likely to see rates rise even further. Minutes of the Fed’s May meeting reinforced previous messaging as policymakers discussed getting to a neutral rate expeditiously, as well as the possibility of tightening policy to restrictive levels. Such a move would be dependent on the evolving economic outlook, which is currently shrouded in a great deal of uncertainty. We continue to expect two successive 50 basis point rate increases at the Fed’s June and July meetings.

Rising interest rates are also taking some steam out of the white-hot U.S. housing market. Mortgage rates have risen sharply, and this has resulted in a pullback in buyer demand. Contracts for sales of existing homes (-3.9% m/m) as well as sales of new homes (-16.6% m/m) fell in April – both posting the largest declines since before the pandemic (Chart 1). Prices however continued to trek upwards with the median price for new homes rising 19.6% year-on-year to $450,600. The combination of high prices and rising rates is likely to see the market cool even further as affordability becomes an issue for more and more buyers.

The Congressional Budget Office also released an updated outlook this week, and is expecting both inflation and economic growth to cool later this year and into 2023. On a fourth quarter-over-fourth quarter basis, the agency expects the economy to grow by 3.1% in 2022 and by 2.2% and 1.5% in 2023 and 2024 respectively. CPI inflation is projected at 4.7% for 2022, 2.7% for 2023 and 2.3% for 2024. These forecasts were completed prior to further fallout from the Russia-Ukraine war. As such, the inflation numbers are likely to come in higher than predicted.

To cap off the week, nominal income and spending were up in April by 0.4% and 0.9% m/m respectively. However, due to inflation real disposable income was flat. On the upside, both headline and core personal consumption expenditure (PCE) inflation decelerated in April (Chart 2). Yearly core PCE inflation cooled from 5.2% in March to 4.9%, still well above the Fed’s comfort zone, but moving in the right direction.

Canada – Bank of Canada Still on Track for Rate Hike

With the Bank of Canada (BoC) meeting set for next week, and another 50-basis point hike all but a given, all eyes were on the retail sales report to see how consumer spending was holding up as the latest wave of the pandemic fades into the background.

March retail sales were effectively flat from the prior month, substantially lower than the 1.4% expansion flash estimate from last month’s release. The headline figure was a disappointment, but the details gave plenty of reason for optimism. The entirety of the miss was attributable to vehicles and auto parts, which contracted 6.4% for the month and dragged the aggregate down to stall speed. Indeed, core sales (excluding gas stations and autos) were up 1.5% for the month. Sales volumes reinforced the fact that there was quite a bit of resilience in spending as all non-automotive categories saw increases. It’s also important to note that the automotive sector is still recovering from semiconductor and supply chain disruptions from 2021, and small setbacks in the recovery are not necessarily indicative of widespread erosion in demand.

Going forward, the Canadian consumer is expected to slow spending in the face of rising interest rates and high inflation. The BoC’s April monetary policy report had anticipated 3.0% GDP growth (quarter-over-quarter annualized basis) in the first quarter and 6.0% in the second. Monthly GDP data suggest that 3.0% is rather pessimistic as even if March were to register no growth, the quarterly figure would still be a roughly 4.1% expansion. It is likely that some of the anticipated strength from the second quarter was pulled forward and the 6.0% projection will prove to be optimistic. That said, even if consumer spending slows, cumulative growth through the first half of the year will be solid, even if the second quarter is weaker than the BoC anticipated. 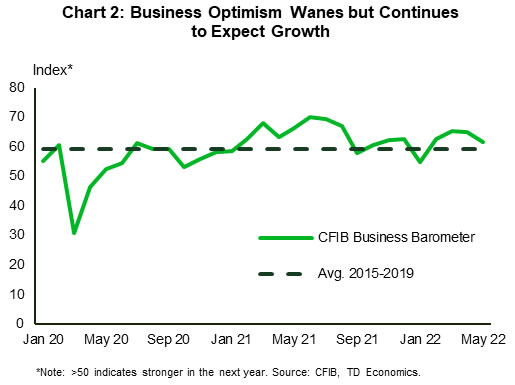 Indeed, the CFIB survey reinforced that even though optimism has waned since March, small businesses are still expecting conditions to improve over the coming year. Hiring intentions remain strong, with roughly 30% of respondents intending to increase headcounts over the coming months. However, respondents also noted that labour markets remain tight and a shortage of both skilled and unskilled/semi-skilled workers were cited as a factor limiting output. Moreover, a dearth of labor is translating into higher wages as companies now expect to raise wages by an average of 3.5% over the coming year, up from 3.2% in April. Of course, rising wage bills are only one component of the inflationary push, and with capacity utilization still running high, it is reassuring to see fewer firms reporting supply disruptions.

Overall, this week’s data painted a picture of an economy whose solid expansion continues. Wage growth is picking up and concerns about rising inflation expectations will keep the BoC on course to raise interest rates by 50 basis points next week.