AUDUSD is starting to ease from the upper Bollinger band that is around the 0.7200 hurdle, after recent price action, which was glued to the upper Bollinger band, hiked the price above the falling 200-period simple moving average (SMA). The softened decline in the slopes of the 100- and 200-period simple moving averages (SMAs) is highlighting the latest successful efforts from buyers, who have recouped nearly 400 pips. Moreover, the climbing 50-period SMA is championing additional gains in the pair.

The short-term oscillators are indicating that the latest dwindling in positive momentum may be short lived. The MACD, is holding above its red trigger line in the positive region, while the RSI is retesting the 70 overbought barrier. Furthermore, the fresh minor dip in the stochastic lines below the 80 level is not demonstrating convincing downward forces.

Worth mentioning is the unfolding of the recent squeeze in the Bollinger bands, which are diverging and suggest that the surge in volatility is expected to grow.

If the positive trajectory endures, resistance could commence from the upper Bollinger band at 0.7209 ahead of the 0.7265 May high. Piloting even higher, the 0.7300 hurdle may then try to delay buyers from tackling the 0.7342-0.7365 resistance band that evolved from the mid-April trough. Recapturing the zone above this boundary could repower upside pressures, bringing the 0.7420 obstacle into play prior to the bulls challenging the 0.7454-0.7474 resistance section, which contains the highs over the second part of April.

Otherwise, if sellers resurface, support could originate at the 0.7116-0.7135 fortified region, which includes the 200-period SMA and the mid-Bollinger band. Moving lower, the 0.7100 mark and the rising 50-period SMA at 0.7082 could provide some downside friction ahead of a buffer zone from the 0.7056 low until the 100-period SMA at 0.7025. Should this deterrent fail to dismiss negative tendencies from returning, the 0.7000 border and the 0.6949 trough could draw traders’ attention.

Summarizing, AUDUSD’s freshly developing bullish move from the 22½-month low of 0.6828 is indicating potential. A jump above 0.7265 could boost buyers’ confidence, while a dive in the price below the 0.7025-0.7056 zone may reinforce a negative vibe in the pair. 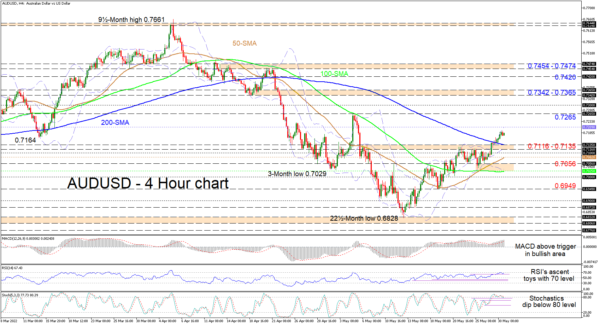