EUR/USD: Euro Stands at the Back Foot ahead of Today’s Key Event – US Inflation Data

The Euro is trading within a narrow consolidation in European session on Friday, but keeps negative tone, following 0.92% post-ECB drop on Thursday.

The single currency lost ground as traders were disappointed by a lack of firmer signals from the ECB about more aggressive steps in coming months, which were widely anticipated ahead of the policy meeting.

The structure on daily chart has weakened after falling daily Ichimoku cloud repeatedly capped the action and subsequent fall left large bearish daily candle (the biggest daily loss since May 12).

On the other side, broken 20DMA (1.0655) reverted to resistance which needs to cap and maintain bearish bias, while bounce and close above 10DMA (1.0696) would sideline bears.
Markets focus on key event today – US inflation data for May.

Annualized figure is expected to remain unchanged at 8.3%, but monthly inflation is seen rising in May (0.7% f/c vs 0.3% in Apr), while encouraging signals come from expectations that closely-watched core CPI (stripped from volatile components) is expected to ease in May, that adds to speculations of peak inflation.

Top US officials continue to describe current levels of inflation as unacceptable, as it hurts the economy as well as politics as anger among Americans rises as prices on petrol stations and supermarkets continue to rise.

The Euro may benefit on inflation peak scenario as this will ease tensions and pressure dollar, while the signal that prices continue to rise will boost expectations for more aggressive steps from Fed and deflate the greenback. 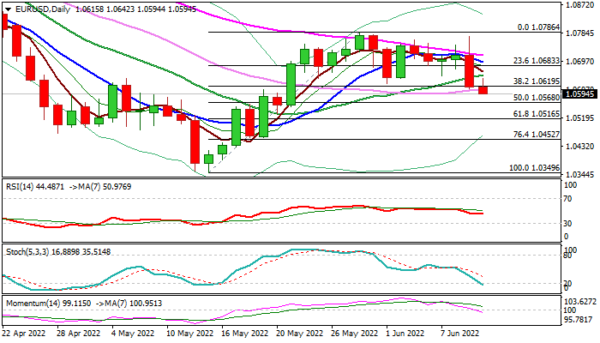