Gold price started a fresh increase from the $1,825 support zone against the US Dollar. The price broke the $1,840 resistance to move into a positive zone.

Besides, there was a clear move above a major bearish trend line with resistance near $1,845 on the hourly chart. The price even settled above the $1,850 level and the 50 hourly simple moving average.

The price traded as high as $1,879 before there was a downside correction. It traded below the $1,870 level. The next major support is near the $1,858 level, below which the price might decline towards the $1,845 support level in the near term.

An immediate resistance on the upside is near the $1,868 level. The next main resistance could be near the $1,880 level, above which the price could start another steady increase. In the stated case, it could rise towards $1,895 on FXOpen. 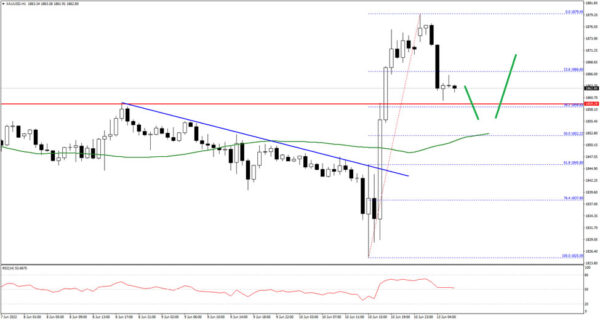