GBPUSD has reversed back up again after finding support at the 27-month low of 1.2070, achieved last week, but the current momentum is still weak.

The technical indicators are pointing to a neutral to negative bias in the short term with the RSI just below 50 and the MACD oscillator remaining in bearish territory. Moreover, the stochastic is attempting a bearish crossover within the %K and %D lines, suggesting a downside movement is nearing.

Further losses should see the latest bottom at 1.2070 acting as major support, while even lower, the 1.1410 key level would reinforce the bearish structure in the long-term timeframe, taken from the trough on March 2020.

In the event of an upside reversal, the short-term simple moving averages (SMAs) around the 1.2455 resistance would act as a barrier before being able to re-challenge the 1.2670 level. A break above this hurdle would shift the short-term outlook to a more bullish one, driving the pair until 1.2970. Further gains would lead the way towards the 1.3165 resistance and the 200-day SMA at 1.3200.

All in all, GBPUSD has been developing within a bearish view since January, posting lower lows and lower highs; however, any advances beyond the 200-day SMA may change the longer timeframe to be positive. 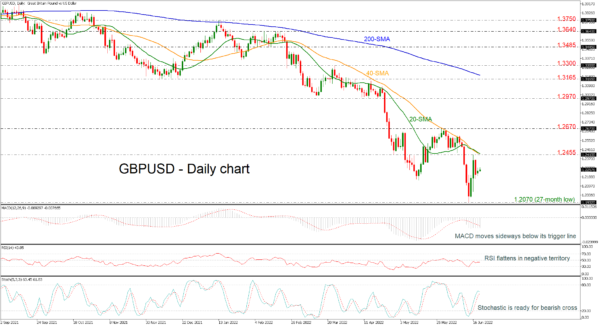