GBPUSD formed a tiny neutral candlestick on Monday above Friday’s closing price of 1.2087 and below the nearby 1.2170 resistance territory.

The refusal to return to the two-year low of 1.1932 could be a rosy sign that buyers are absorbing selling pressures in the market as the price is currently trying to set a foothold around the 1.2100 level. Yet, the RSI is still preserving a negative trajectory well below its 50 neutral mark, and the MACD has recently ticked back below its red signal line, both downplaying any meaningful recovery.

The 1.2170 cap will remain in focus in the coming sessions as the constraining 20-day simple moving average (SMA) is also converging towards that region. A successful move higher from here may then attempt to knock down a tougher wall at 1.2270 with scope to revisit the crucial zone of 1.2360 – 1.2411. Notably, the 50-day SMA, the descending trendline from February, and the 23.6% Fibonacci retracement of the 2022 downtrend are all positioned here. Hence any violation at this point is expected to unleash faster bullish corrections, likely up to the 38.2% Fibonacci of 1.2626.

Alternatively, if downside forces dominate, driving the price below 1.2085, the spotlight will immediately fall on the 1.1988 – 1.1932 floor. Snapping that base, the bears could chart a new lower low around 1.2765 taken from the March 2020 limits, while deeper, the sell-off could stall near 1.1620, which was also somewhat restrictive during the same period.

In brief, downside risks keep lingering in the background despite the latest stabilization in GBPUSD. A step above 1.2170 or below 1.2085 could navigate the pair accordingly. 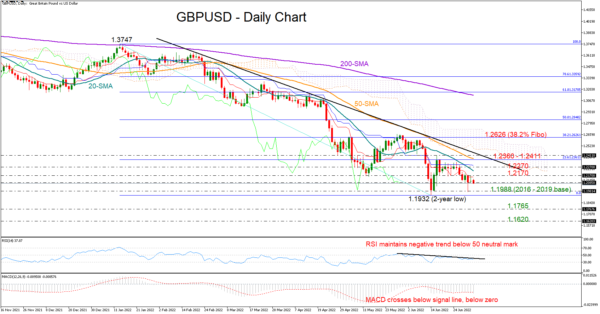