USDCAD shifted to the sidelines immediately after charting a new lower low at 1.2766 in the short-term picture, unable to reach the constraining 20-day simple moving average (SMA).

The technical indicators state a bearish-to-neutral bias as the RSI keeps flattening marginally below its 50 neutral mark and the MACD is extending its short horizontal move slightly below zero around its red signal line.

Hence, traders may keep directing the market sideways unless they see a break above the 20-day SMA at 1.2900, and more importantly, a close above the 1.2963 restrictive zone. If that turns out to be the case, the bullish correction could ramp up to 1.3026, where the flattening 200-weekly SMA has been ceasing upside pressures over the past two months. Higher, a rally above the 1.3077 – 1.3120 resistance region could clear the way towards the 1.3222 top.

Should sellers retake control, initial limitations could occur around the 1.2800 level. A successful step lower may then halt around the 200-day SMA at 1.2740, a break of which could re-test the restrictions within the 1.2960 – 1.2940 zone before stretching towards the 2021 support trendline seen at 1.2612. 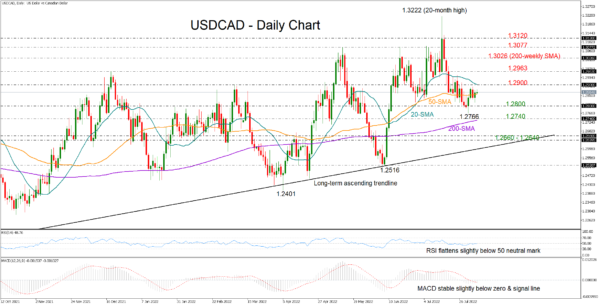