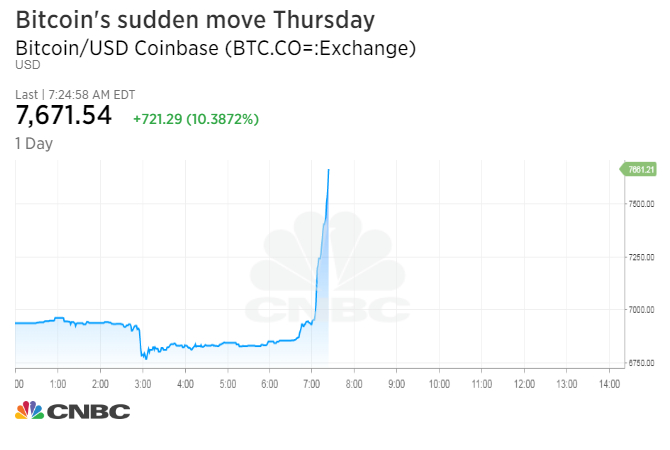 Bitcoin surged Thursday more than 17 percent in a sudden move to above $8,000 at one point, according to trading on Coinbase.

The cryptocurrency hit a high of $8,011 on Coinbase.

Trading was volatile and bitcoin was about 11.5 percent higher over the last 24 hours near $7,700 as of 3:31 p.m. ET, according to Coinbase. Bitcoin leaped from a low of $6,786 Thursday morning and some traders are watching whether it can hold above $7,500.

The sudden jump forced traders who had bet against the cryptocurrency to buy back into the market.

“Once [bitcoin] broke higher, shorts were squeezed and forced to cover,” said Brian Kelly, CNBC contributor and head of BKCM, which runs a digital assets strategy for clients.

“The ratio of short margin trades versus longs has been increasing recently,” said Nick Kirk, quantitative developer and data scientist at Cypher Capital, a cryptocurrency trading firm. “Buying volume ticked up today and a lot of these short trades got liquidated, helping fuel the rally.”

Bitcoin surged above $19,000 in December, a gain of 2,000 percent over the previous 12 months. But the cryptocurrency has since lost roughly two-thirds of its value given worries about regulatory crackdowns and tax-related selling ahead of the U.S. tax deadline on April 17.

Investors who sold or even traded bitcoin last year owe taxes since the IRS views cryptocurrencies as property, meaning transactions are generally taxed. U.S. households likely owe $25 billion in capital gains taxes for their cryptocurrency holdings, according to estimates by Tom Lee, head of research at Fundstrat Global Advisors.

Some traders indicated Thursday’s move could be an unwinding of that pressure.

“I think it’s just some pent-up market movement,” said Ansel Lindner, a bitcoin investor and host of the “Bitcoin & Markets” podcast. There’s also “some relief in the selling” ahead of tax day.

“Even though the price has been going down lately, the development of the next generation bitcoin infrastructure hasn’t stopped,” Lindner said.

Bitcoin “stabilized above $6,500 support over the past two weeks and is rallying through important technical resistance defined by its March downtrend,” he said, noting the next major area of resistance is near $9,000.

Other major cryptocurrencies also gained Thursday. Ethereum traded 9.5 percent higher over the last 24 hours near $463, according to Coinbase.