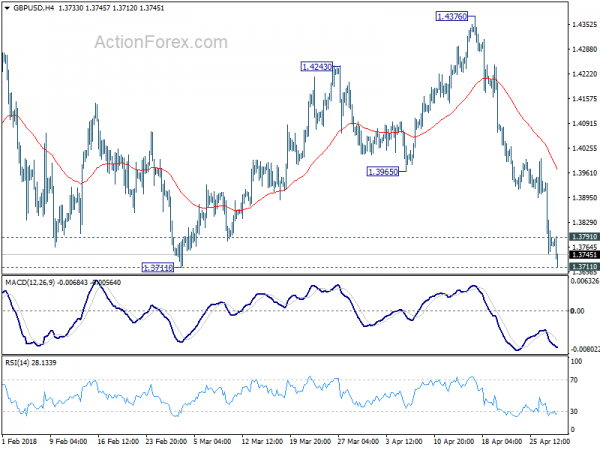 Dollar remains firm in early US session after release of personal income and spending data. But now, the green back is held below Friday’s high against all but Sterling. Canadian Dollar follows as the second strongest. The Pound was initial sold off earlier today but then quickly rebounded. It’s Aussie and Kiwi that are trading as the weakest ones. Elsewhere, European indices are trading generally higher today even though gains are limited so far. FTSE and CAC are up around 0.3% while DAX is nearly flat. US futures point to to higher open as DOW could have a take on 24400.

Technically, GBP/USD dipped to as low as 1.3712 so far, just inch above 1.3711 key support. This is an important level to watch in the session as firm break there will indicate medium term reversal. AUD/USD, trading at around 0.7540, will be eying 0.7500 key support. This is also a level to watch considering there will be RBA rate decision tomorrow.

Swiss KOF Economic Barometer rose to 105.3 in April, up from 105.1 but missed expectation of 106.0. KOF noted in the release that “although the Barometer currently does not reach the positive values seen at the turn of the year 2017/2018, the current value is clearly above long-term average.” And, “the Swiss economic outlook remains favourable.”

Also KOF said that even though the 0.2 pts rise was “tiny”, “it is broadly visible in the economic sectors included.” It noted that “the indicator bundles for manufacturing, accommodation and food service activities, banking, construction and consumption all showed slight increases in April.” However, “an exception is the indicator set for export prospects; it deteriorated in April.”

EU Malmström to talk to US Ross on steel tariff exemptions

Regarding the US steel tariffs, EU Trade Commissioner Cecilia Malmström will speak with US Commerce Wilbur Ross today. Malmström will try to get last minute consent from the US to exempt the tariffs on EU, which temporary exemption expires tomorrow. However, it’s reported that EU officials are concerned with impossible demands from the US. European Commission spokes Margaritis Schinas said in a news conference calmly that “we are patient but we are also prepared.” EU’s stance was made clear after German Chancellor spoke with French President Emmanuel Macron and UK Prime Minister Theresa May on Sunday. Merkel said Europe was “resolved to defend its interests within the multilateral trade framework”.

On April 16, EU has already submitted a request to WTO to determine how the US can compensate if trade flows into the EU are affected by the new tariffs. That’s request was under TWO’s Safeguard Agreements. EU also plans to join another separate WTO complaint against the US, arguing that the steel tariffs violate the most-favored nation principle, which forbid discrimination between their trading partners. In addition, it’s reported that EU could retaliate by imposing levies on EUR 2.8b of American goods. And that could start as soon as on June 21, 90 days after the US steel tariffs took effect.

US steel tariff temporary exemptions to end on May 1

The temporary exemptions on US steel and aluminum tariffs will expire tomorrow on May 1. There is little progress made on trade negotiation between the US and other countries. Commerce Secretary Wilbur Ross was quoted saying that some countries will have their exemptions extended, but not all. But there is no more information from the White House regarding the pressing issue.

So far, only South Korea is granted permanent exemptions after revising the bilateral free trade agreements with the US. There, South Korea agreed to a quota of around 2.7 million tons of steel exports to the US. And, the quota for US car imports was doubled to 50,000, without the requirement to meet local safety standards.

NAFTA negotiations made some progress last week after intensive work, but it’s not ready to be wrapped up before May 1 target. Talks will instead resume on May 7 after US Trade Representative Robert Lighthizer returns from his China trip. It’s believed that Canada and Mexico will have their exemptions extended but it’s only confirmed when it’s announced.

China’s National Bureau of Statistics reported that manufacturing PMI eased to 51.4 in April, from 51.5 a month ago. This, however, came in better than consensus of 51.3. The non-manufacturing improved to 54.8 in April from 54.6 in the prior month. The composite PMI output index also edged +0.1 point higher to 54.1 for the month. The moderation in the manufacturing sector was driven by slowdown in foreign demand, as well as the aftermath of the rapid easing in credit growth in the first quarter. Focusing on small and medium firms, Caixin/ Markit’s manufacturing PMI, due Wednesday, probably slipped -0.1 point to 50.9, while services PMI, due Friday, steadied at 52.3 in April. More in Official PMI Shows Slowdown in China’s Manufacturing Sector

RBA is going to announce rate decision tomorrow. And, it’s widely expected the it would keep the cash rate unchanged at 1.50%, and maintain a neutral stance. The message has been delivered repeatedly, while the next move is a hike, there is no pressing need to act in the near term.

The more interest part could be the new economic forecasts. Back in February, RBA projected GDP to grow 3.25% in both 2018 and 2019. And, they were above the government’s forecasts released back in December. The government projected growth to be at 3.0% in fiscal 2018/19 and fiscal 2019/20. There are some expectations for RBA to lower 2018 growth forecast this week, while the government may raise it as it delivers the May Budget.

Also, RBA projected underlying inflation (in February) to hit 1.75% in 2018 and 2.00% in 2019. But there is sofar no sign of any up trend in inflation yet. It’s more likely for RBA to keep inflation projections unchanged.

GBP/USD’s fall extends to as low as 1.3712 so far today and intraday bias remains on the downside. Decisive break of 1.3711 key support should confirm medium term reversal. That is whole rally from 1.1946 has completed. And deeper fall should be seen to 1.3448 fibonacci level next. On the upside, above 1.3791 minor resistance will turn intraday bias neutral and bring consolidations first, before staging another fall.

In the bigger picture, bearish divergence condition in daily MACD is raising the chance of medium term reversal. Also, note that GBP/USD has just failed to sustain above 55 month EMA (now at 1.4257) again. Focus is back on 1.3711 support. Firm break there will confirm medium term reversal and target 38.2% retracement of 1.1936 (2016 low) to 1.4376 at 1.3448 first. Break will target 61.8% retracement at 1.2874 and below. For now, sustained break of 55 month EMA is needed to confirm medium term upside momentum. Otherwise, we won’t turn bullish even in case of strong rebound.