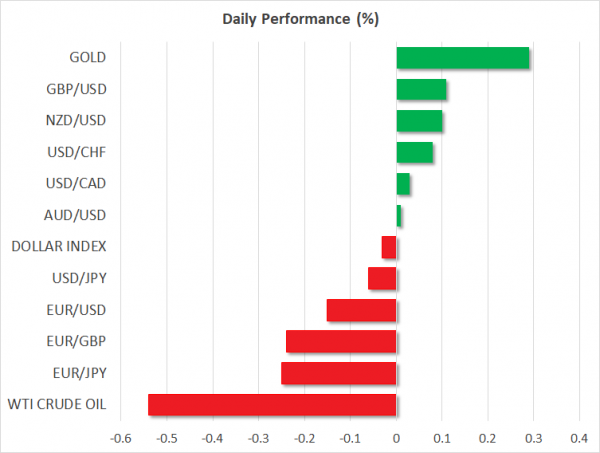 FOREX: With US markets being closed for Independence Day and trade risks discouraging investors from buying the dollar ahead of a deadline on Friday, when US import tariffs on $34 billion Chinese goods will take effect, the dollar was marginally down on the day against the safe-haven Japanese yen at 110.47 (-0.10%). The dollar index was flat at 94.67 as the euro turned weaker, whereas the pound continued to trade in positive territory. Euro/dollar slipped to 1.1634 (-0.18%) after the Markit surveys for June confirmed that business sentiment in the Eurozone dropped to its lowest since November 2016, even despite a slight upward revision in the bloc’s final composite and services PMIs earlier today. UK’s Markit/CIPS Service PMI for the month of June also surprised to the upside, with pound/dollar returning back above the 1.32 key level after touching an intra-day low of 1.3168 prior to the release. In antipodean currencies, aussie/dollar was steady around 0.7380 and kiwi/dollar slightly higher at 0.6766 (+0.16%). The commodity-linked loonie was also lacking direction, last seen at 1.3139. The Chinese yuan strengthened for the second day versus the greenback, climbing by 0.27% after the Chinese central bank promised to keep the local currency steady, calming those who feared that the recent downfall in the yuan was a sign of intervention in the FX markets.

STOCKS: European stocks were trading mixed at 1150 GMT on Wednesday, with investors eagerly waiting to see what China’s response would be if Trump indeed implements import tariffs on Chinese products on Friday. The benchmark STOXX 600 and the blue-chip Euro STOXX 50 were up by 0.15% and 0.34% respectively, led by telecommunications. Tech stocks and basic materials were losing the most. The German DAX 30 fell by 0.08%, the French CAC 40 rose by 0.28%, the UK’s FTSE 100 lost 0.14%, while the Italian FTSE MIB was flat. The Spanish IBEX 35 was among the best performers, adding 0.90% to its value. In the US, equity markets will remain closed for the Independence Day public holiday.

COMMODITIES: WTI crude oil and the London-based Brent were moving in different directions as well, with the former deviating further below yesterday’s multi-year high of $75.27/barrel to touch $73.87 (-0.38%) and the latter gaining an equivalent percentage (+0.38%).to rise back to $78.08/barrel. Currently, upside risks are stemming from supply disruptions in Canada, Libya, and Venezuela, while downside pressures are fueled by the OPEC/non-OPEC pledge to start increasing output this month, with Saudi Arabia and Russia reaffirming the agreement yesterday, saying that production will go up by 1 million bpd. The news came days after the US President said that Saudi Arabia assured him of a supply rise double than that. In precious metals, gold was heading north for the second day, crawling up to $1,256.76/ounce (+0.32%).

Day Ahead: Light calendar as US markets close for Independence Day; investors look to FOMC minutes and NFP

On Wednesday, liquidity will be thin thanks to Independence Day celebrations in the US, with investors shifting their focus to FOMC meeting minutes and nonfarm payrolls coming out on Thursday and Friday respectively. The trade story will remain at the forefront as the US is ready to trigger its import tariffs on China on Friday, a move that is expected to provoke retaliatory measures from China as well.

Taking a more in-depth look, tomorrow, minutes from the latest FOMC policy meeting will gather attention. On June 12-13 FOMC members decided to increase the Federal funds rate by 25bps. Moreover, the new ‘dot plot’ was revised upwards to signal two more rate hikes by the end of the year, instead of just one more indicated in the previous one, marking a total number of four increases this year.

The day after the Fed releases minutes, the US employment report for June is coming into focus, the same day when the US tariffs on $34 billion worth of Chinese goods will go into effect.

In terms of employment, the number of people employed in private and public nonfarm sectors is expected to increase by 195k compared to a rise of 223k in the previous month. The unemployment rate is forecast to have held steady at its 18-year low of 3.8%, while average hourly earnings are expected to have risen at June’s pace of 0.3% m/m.

Overall, forecasts point to another strong report, consistent with a further tightening of the labor market.