More pain ahead for emerging markets as trade war gets hotter 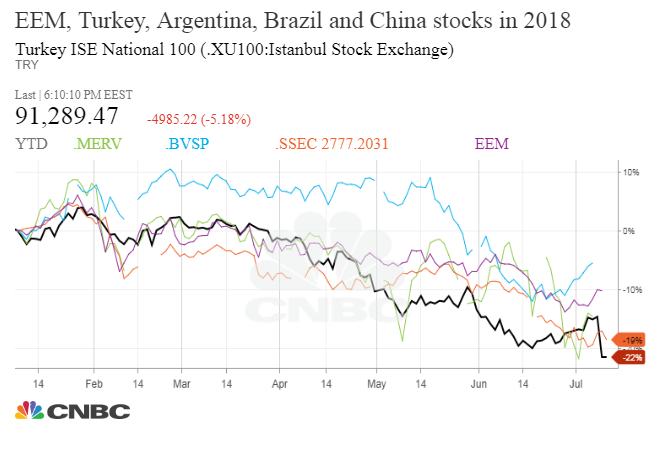 Emerging markets could be headed for more declines this year — adding to already steep losses for 2018 — as trade tensions between the world’s largest economies increase and interest rates rise.

The iShares MSCI Emerging Markets exchange-traded fund (EEM), which tracks emerging-market stocks, fell 8 percent in the first six months of the year and is still down more than 7 percent. Among the biggest decliners in emerging markets were Argentine, Turkish, Brazilian and Chinese shares.

The sharp declines came as relations between the U.S. and some of its biggest trade partners soured and as central banks around the world started raising rates from a period of historic lows, setting up emerging markets for another wave of pain.

“This really resulted from the escalation in trade tensions on multiple fronts,” said Jon Harrison, director of macro strategy at TS Lombard. “This is also taking place against a backdrop of tighter monetary policy as central banks raise rates.”

“A lot of emerging markets have seen export growth in the past year, which helps their economies,” Harrison said. “But that is dependent on increases in global trade. If you see lower world trade, the big EM exporters will be hurt.”

The U.S. unveiled on Tuesday a list of $200 billion in Chinese goods it is targeting for tariffs. The announcement came after the U.S. slapped tariffs on $34 billion of Chinese goods last week. The U.S. has also implemented tariffs on steel and aluminum imports from Mexico, Canada and the European Union. They have retaliated to those levies with tariffs of their own.

Emerging-market equities fell more than 1 percent on Wednesday after the US released the list of possible new China goods tariffs.

Rising trade tensions have kept investors in some of the largest financial markets on edge. The S&P 500 is up just 1.6 percent for the year. In Europe, the Stoxx 600 index has declined 0.8 percent. The Japanese Nikkei 225 index is also down more than 2 percent. These losses pale in comparison to the pain felt in emerging markets, however.

Argentina’s Merval index is down 8.3 percent in 2018, while Turkey’s ISE National 100 index has plummeted nearly 20 percent. In China, the Shanghai Composite is down 16 percent year to date. Brazil’s Bovespa index was down as much as 8.6 percent before recovering some of those losses.

The sharp moves down in emerging markets come as the dollar has surged against these countries’ currencies and the Federal Reserve sets plans for more rate increases.

The Brazilian real is down nearly 15 percent against the dollar, while the Turkish Lira has dropped 24 percent. The Chinese yuan is down more than 4.5 percent since April and has slipped nearly 2 percent this year. Meanwhile, the Argentine peso has plunged nearly 50 percent this year and hit a record low against the U.S. currency.

“The whole EM crisis this year has been essentially triggered by a shortage of dollars around the world,” said Larry McDonald, head of the U.S. macro strategies at ACG Analytics and editor of The Bear Traps Report.

The U.S. Federal Reserve has already raised rates twice this year and expects to hike two more times before year-end. The Fed slashed the overnight rate down to zero in 2008 during the financial crisis. The central bank’s goal at the time was to stimulate the economy. A decade later, the Fed has started to gradually hike rates closer to historical levels.

Treasury yields have reached multi-year highs in 2018, with the 10-year note yield breaking above 3 percent earlier in the year. But the benchmark yield has traded in a range, holding between 3 percent and 2.77 percent since May.

“I don’t think the emerging-markets decline has fully played out yet,” said Jens Nordvig, founder of Exante Data, in a recent interview with CNBC.com. “I think this has had to do with global trade tensions. We could have a situation where trade tensions go away for a bit, but then you have Treasury rates going back up and EM gets hit again.”

“This could be a structural issue,” he said.

But McDonald of ACG Analytics thinks there could be a buying opportunity in emerging markets as increasing trade tensions hinder the Fed’s ability to raise rates. “At the end of the day, the trade risk is much more than they can handle.”