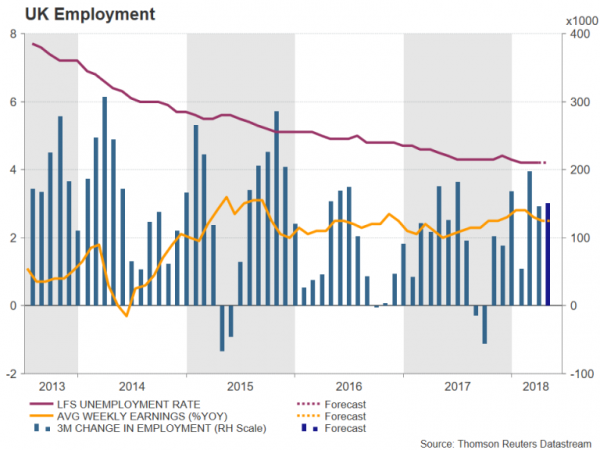 The UK’s Office for National Statistics will publish its latest stats on the labour market on Tuesday at 08:30 GMT. The report will be the first of three major releases out of the UK this week, which come just a fortnight before the Bank of England’s August monetary policy meeting. With rate hike expectations rising to above 70% in recent weeks, those odds could be given an additional boost if this week’s data further reinforces the view that the first quarter economic slowdown was temporary. However, in forex markets, pound traders might be paying more attention to the Brexit ongoings as UK Parliament discusses the government’s customs and trade bills.

Britain’s labour market has remained tight even as growth cooled notably in the first three months of the year. The jobless rate has held steady at a more than four-decade low of 4.2% since January and is forecast to stay at that level in May. Job creation has been buoyant during 2018, with the number of people in work rising by 146k in the three months to April. Expectations are that there will be another solid rise in employment in the three months to May, with analysts estimating a gain of 150k.

However, of immediate concern for Bank of England policymakers will be the pace of wage increases as there are worries that the reduction in the number of EU workers coming into the UK after the Brexit vote is creating skills shortages in several sectors. Despite these concerns though, there are yet to be any signs of higher pay deals. Wage growth has remained below 3% since late 2015 and is only marginally above inflation, meaning real incomes are rising very moderately. Average weekly earnings were up 2.5% year-on-year in the three months to April and are expected to stay unchanged in May. Excluding bonuses, earnings are forecast to ease slightly from 2.8% to 2.7% y/y.

A bigger-than-projected rise in wages would fuel expectations that the BoE will hike interest rates next month on August 2 as the central bank would seek to prevent the labour market from overheating. Higher wage growth tends to produce an inflationary spiral as firms raise their prices to cover rising labour costs, which then leads to even higher wage demands. An overall strong jobs numbers, even if earnings growth remained muted, would also boost the pound as it would be seen as further proof of economic activity rebounding in the second quarter.

Sterling could get a lift above the $1.33 level in the event of upbeat data, though the 50-day moving average around $1.3320 could cap more extensive gains. Resistance could also come near the July top of $1.3362 before being able to challenge the $1.34 handle.

However, should the jobs figures fall short of expectations, the pound could retreat towards the $1.3225 support area before once again testing the $1.31 level. A drop below $1.31 would open the way towards June’s 8-month low of $1.3048.

Another potential downside risk for sterling this week is UK lawmakers’ debate on Prime Minister Theresa May’s third-way plan for a post-Brexit customs partnership with the EU and the resumption of Brexit talks in Brussels. With both pro-Brexit and pro-European MPs being unhappy with May’s proposals, the customs bill faces a difficult hurdle in Parliament, while the possible rejection of the UK’s plans by the EU could erase sterling’s July bounce.