UK Inflation & Retail Sales Next to Give Direction to the Pound 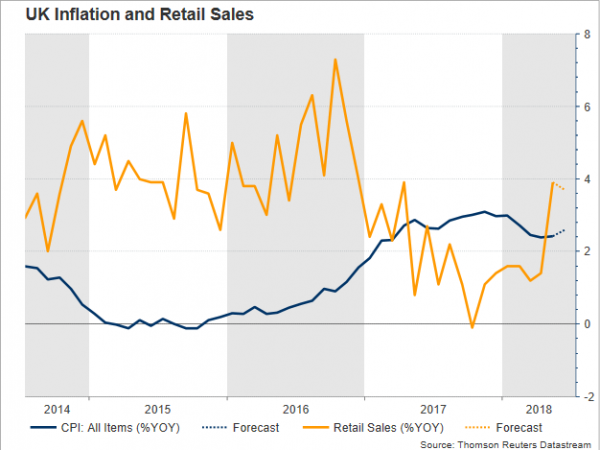 With the UK jobs report coming in line with forecasts, with the unemployment rate remaining at its lowest since the 1970s and average earnings inching down, the next challenge for sterling will come on Wednesday when the Office for National Statistics is scheduled to report June’s inflation readings before it updates retail sales figures for the same month on Thursday. While inflation is said to rebound again, potentially raising expectations for higher interest rates in August, policymakers could think twice before proceeding with a rate hike as retail sales could indicate that consumers are not ready for such an action. Still, Brexit is considered the major risk to determine the rate outlook according to the Bank of England’s chairman, Mark Carney.

At 0830 GMT on Wednesday, UK’s headline CPI is expected to show that consumer prices have grown by 2.6% year-on-year (y/y) in June, faster than in May when the measure came in at 2.4%. June’s anticipated rise is likely owed to rising energy prices which held an upward trajectory since last summer, with the London-based Brent crude hitting 3 ½-year highs in June. Additionally, the declining sterling is also supportive of higher inflation; sterling’s fall from April onwards is evident from the chart below.

In the retail front, expectations are not positive, with analysts projecting retail sales to grow at a much slower pace of 0.2% month-on-month in June after surging by 1.3% in April, pushing the annual expansion 0.2 percentage points lower to 3.5%. Excluding fuel, the situation is not turning any better as the gauge is seen declining by 0.3% m/m following an increase of 1.3% in the preceding month. On a yearly basis, the slowdown in core retail sales could be much more severe as forecasts suggest an almost 1% drop, from 4.4% to 3.4%.

In the forex space, pound/dollar could benefit in case inflation and retail sales beat forecasts, hinting that the economy might bear another rate hike in August as BoE policymakers seek to drive inflation towards their 2.0% price target, avoiding at the same time a consumption meltdown. Presenting on Tuesday the central bank’s latest Financial Stability Report before the Parliament’s Treasury Select Committee, though, the BoE chief, Mark Carney said that “it would be a material event for interest rates if Britain leaves the European Union next year without a deal to smooth its departure”. The statement is increasing speculation that policymakers could refrain from further reducing accommodative policies in coming months if divisions over the Brexit plan result to a hard exit from the EU.

Nevertheless, pound/dollar could still rise if CPI figures and retail sales surprise to the upside even if Brexit uncertainty has the capacity to keep gains under control. In this case, the cable could pierce the 1.3200 key level with scope to test the 50-day moving average at 1.3316 before it heads up to the July 7 peak of 1.3362. On the other hand, in case of disappointing data, cable could slip further to reach the 1.3100 round level. Sharper losses could also target the almost 8-month low of 1.3048 reached on June 26.