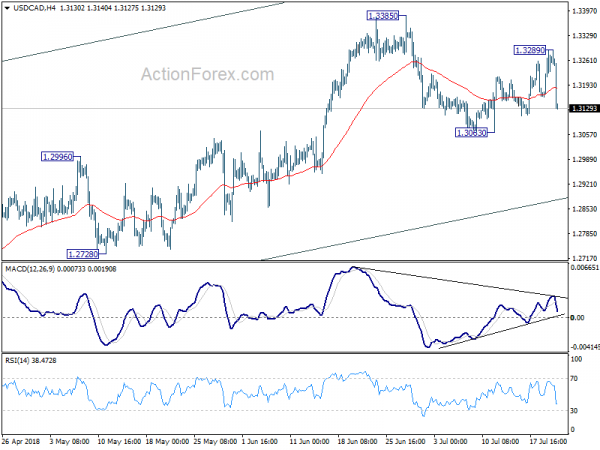 Dollar suffers steep selloff in the early US session as WSJ reports that Senate Finance Committee Chairman Orrin Hatch sent a letter to Trump requesting him to reconsider his trade policies. And Hatch warned that GOP senators may be ready to risk a legislative confrontation with Trump if he doesn’t reverse course. Hatch is a seven-term Utah Republican Senator who’s seen as a reliable Trump ally.

Earlier today, CNBC released a video on the interview of Trump at the White House taken yesterday. Trump complained again the the US has been “ripped off by China for a long time”. And he’s “ready to go to 500”, referring to tariffs on USD 500B of Chinese imports. That’s nearly all of the USD 505.5B Chinese imports in 2017. And he pledged that he’s “not doing this for politics” but “to do the right thing for the country”.

The timing of these rhetorics and the interview is a bit odd. But after all, we’ll soon know whether these stories will continue to develop, or the American’s focuses will be back on the relationship of their President and Russia and Vladimir Putin quickly.

The set of data gives a nod to BoC’s rate hike earlier in the month and it’s hawkish stance.

German Merkel: Can’t rely on the superpower of the US

German Chancellor Angela Merkel said in a news conference that the Germany “can’t rely on the superpower of the United States. And the auto tariffs are “a real threat to the prosperity of many in the world”. Also, the “usual framework” of the world is “under strong pressure at the moment” before of the US. Though, she maintain that “transatlantic working relationship, including with the U.S. president, is crucial for us and I will carry on cultivating it”.

For the EU, Merkel said it’s in a “transformation process”. And, “it recognizes the seriousness of the situation, but it hasn’t yet been resolved whether we are going to rise to the challenges quickly enough.” She pointed to the “big economic challenge, and one day certainly also military, from the strengthening of China”. And, the EU must also deal with the relationship with Russia.

The set of data should be rather disappointing for the BoJ. The decline in core core CPI suggests that inflation was mainly driven by the surge in energy costs. There wasn’t much of press pressure elsewhere. It’s remains a long road to meet its 2% inflation target. And there is no light on when the central could withdraw the massive stimulus.

USD/CAD’s sharp decline suggests that a temporary top is at least formed at 1.3289. But it’s staying above 1.3063 so far and intraday bias is turned neutral first. On the downside, break of 1.3063 will extend the corrective decline from 1.3385 with another falling leg. USD/CAD should then target channel support (now at 1.2880). For now, we’d expect strong support from there to bring rebound. On the upside, above 1.3289 will bring retest of 1.3385 high instead.