Australian Inflation Data Next on the Docket for the Aussie 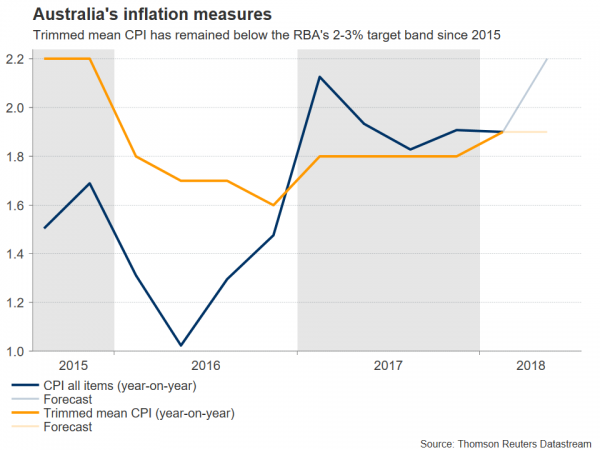 Australia’s quarterly inflation data for Q2 will be released on Wednesday, at 0130 GMT. Forecasts point to an overall lackluster report, expected to show an energy-driven pickup in the headline rate but an otherwise subdued picture for underlying inflation, which could cement expectations the RBA will remain on hold for the foreseeable future.

Expectations that the Reserve Bank of Australia (RBA) will take any form of policy action over the foreseeable future have moderated dramatically in recent months. Whereas back in January markets were placing approximately even odds on the Bank raising rates or remaining on hold by year-end, the probability for a 25bps rate increase has now plunged to below 3%.

On the bright side, the labor market is strong, but that has failed to manifest into higher wages for Australian households that are heavily indebted already, and hence could really benefit from a pay rise. Meanwhile, trade tensions between the US and China are casting a long shadow on the prospects for Australia’s export-driven economy. Add on top an overall weak inflation picture, with measures of underlying inflation remaining stubbornly below the RBA’s 2-3% target, and one begins to grasp the severe repricing in hike expectations. The aussie has moved accordingly, declining by roughly 9% against the dollar since late January.

The upcoming inflation data are not expected to show a material improvement in Q2 either. While the headline inflation rate is projected to have risen to 2.2% in yearly terms, from 1.9% previously, the pickup appears to be owed mainly to an increase in oil prices, and not the healthy demand-driven inflation the RBA would like to see. The trimmed mean CPI rate is expected to have remained unchanged at 1.9% while the weighted median CPI is anticipated to have eased slightly to 1.9% from 2.0% previously.

Even if the upcoming inflation data were to surprise to the upside, it’s doubtful whether that would be enough to lead to a sustained recovery in the aussie. Markets may need to see much more before putting the prospect of an RBA rate hike back on the table, and most notably a pickup in wages. The next set of wage data will be released on August 15.

Finally, trade tensions will also play a large role in determining the aussie’s forthcoming direction. Besides relying heavily on commodity exports, Australia also has very close economic ties to China, so any escalation in the US-China standoff would probably have severe consequences for Australia. While the rhetoric has continued to escalate, with the US President recently threatening to impose tariffs on all Chinese imports to the US, investors appear not to have taken that at face value, judging by the relatively limited market reaction.

Technically, looking at aussie/dollar, further declines could encounter an initial line of support around the 18-month low of 0.7308 posted on July 2. A downside break may pave the way for the 0.7245 zone, marked by the inside swing high on 30 December 2016. Lower still, declines could stall around the low of 23 December 2016, at 0.7155.

On the upside, preliminary resistance to advances may come around 0.7484, defined by the peak of July 9. If the bulls manage to pierce through it, the June 6 peak of 0.7675 would increasingly come into view. Even higher, the high of April 19 at 0.7810 could attract attention.