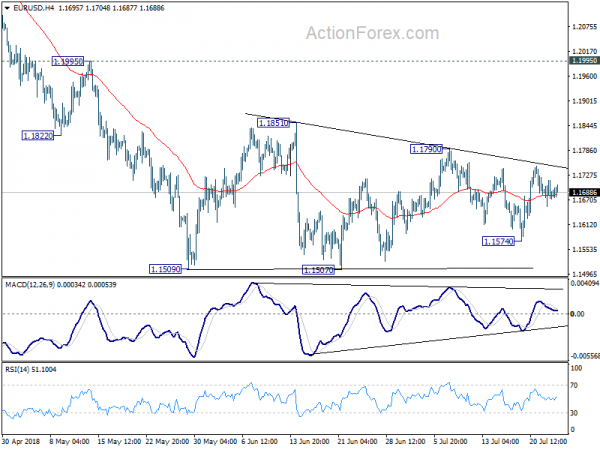 Dollar and Euro are trading generally lower today, except versus Australian Dollar. The meeting between Donald “master of deal” Trump and Jean-Claude “the brutal killer” Juncker is closely watched. But it’s highly unlikely to yield any results on trade. Trump’s recent threat on tariffs on all Chinese products, the USD 12B aid programs to farmers, and the urge for farmers to be “patient”, all suggested he’s not going to back down from the current position. On the other hand, the EU has been clear all the way that they won’t negotiate with a gun pointing to their heads. So, there is no ground for any compromise. Euro traders might look through the event to tomorrow’s ECB rate decision and press conference. But sorry, it’s not going to be inspirational neither.

In other markets, the global stock markets are rather mixed today. Asia was strong with Nikkei gained 0.46%, Hong Kong HSI up 0.90% and Singapore Strait Times up 1.04%. China Shanghai SSE composite closed down slightly by -0.07%, at 2903.65. European stocks, however, are trading generally in red, with FTSE down -0.85% at the time of writing. DAX is down -0.7% while CAC is nearly flat. Gold’s consolidation continues today with another recovery and is back above 1230. WTI crude oil is trading at around 68.5.

EU preparing tariffs on USD 20B in US imports, as counter measures to auto tariffs

Ahead of the meeting with Trump, European Trade Commissioner Cecilia Malmstrom said that “we hope that it doesn’t come to that and that we can find a solution. If not, the EU Commission is preparing a rather long list of many American goods. It would be around $20 billion.” But the next round of EU tariffs will not target specific US states. Malmstrom said “it’s more general goods such as agricultural products, machinery, high-tech products and other things.”

According to reports, the EU originally considered tariffs on EUR 9B of US imports. But now, they’re looking at going after double that amount, but at half the tariff rate. Also, such tariffs are expected to come into effect at least after US completes its section 232 national security probe on autos. It’s expected to be completed in weeks, probably by late August/early September.

EU Oettinger to Trump: Drop your punitive tariffs, and we can talk about all tariff reductions

European Union Budget Commissioner Guenther Oettinger commented regarding EU-US trade relationship, ahead of Juncker’s meeting with Trump. Oettinger said “firstly, our common line is that we expect the existing punitive tariffs to be lifted”, referring the section 232 national security steel and aluminum tariffs. And, “then we are ready to discuss a reduction and restructuring of all tariffs in all sectors.”

He added that “in this way, we want to avoid a further escalation of the trade conflict, and to avoid a trade war/” And, “one could try to untangle the existing tariffs and then … reduce tariffs for various goods and services.” He added that ” would be a negotiation that would be possible in half a year, and which we could start with the U.S. in the autumn.”

Ifo President Clemens Fuest said in the release that “companies were slightly more satisfied with their current business situation, but scaled back their business expectations slightly. The German economy continues to expand, but at a slower pace.”

Also, “the business climate index fell in trade. Traders were increasingly sceptical about their six-month business outlook, but more satisfied with their current business situation. This effect was particularly marked in retailing.”

Australia CPI rose 0.4% qoq, 2.1% yoy in Q2. The annual rate accelerated from Q1’s 1.9% yoy but missed expectation of 2.2% yoy. RBA trimmed mean CPI was unchanged at 1.9%, inline with expectation. RBA weighted median CPI slowed to 1.9% yoy, down from 2.0% yoy, matched expectation. RBA is very clear with its stance that there is no compelling reason to raise interest rate in near term. And the inflation data certainly won’t alter that position.

EUR/USD hardly moves today and is engaging in consolidative trading in range above 1.1507/9. Intraday bias remains neutral at this point. Stronger recovery cannot be ruled out as the consolidation extends. But in that case, upside should be limited by 1.1851 resistance to bring fall resumption eventually. On the downside , firm break of 1.1507 will resume larger down trend through 50% retracement of 1.0339 to 1.2555 at 1.1447.