Dollar Mixed Ahead of Busy Week in the Market 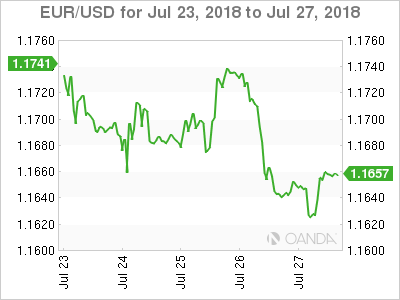 The US dollar is mixed on Friday against major pairs. The US economy grew at a 4.1 percent pace on the second quarter according to the first estimate. The number came in right on the forecast which had no positive effect for the USD, but it did validate the U.S. Federal Reserve decision to keep a tighter monetary policy with two more rate hikes in the horizon this year. The week from July 30 to August 3 will be full to the brim featuring monetary policy announcements from the Bank of Japan (BOJ) the Fed, the Bank of England (BoE) and the release of jobs data in the United States.

The EUR/USD lost 0.51 percent in the past five days. The single currency is trading at 1.1659 after the European Central Bank (ECB) did not provide any additional information at the end of its monetary policy meeting in July. The statement was almost a word for word recreation of the June document offering no insights for investors on when the central bank is willing to start lifting rates. The growing gap between US interest rates and European rates and an impressive growth rate in the second quarter in America gave the edge to the US dollar.

US President Trump said on Friday that the US will beat the current pace of growth going forward. The strong fundamental data will be vital for Republicans as they face midterm elections in the fall. Politics in Europe continue to add uncertainty as Italy’s Five Star founder once again is seeking a referendum on euro membership.

The U.S. Federal Reserve is not expected to announce any changes on Wednesday when it wrap up its August meeting. The next rate move is expected in September, which a more than 90 percent probability of a hike if inflation and growth continue in their current trends.

The USD/CAD lost 0.64 percent in the last week. The currency pair is trading at 1.3058 in a week that saw trade war concerns ease. The NAFTA and EU-US trade conversation both had positive sound bites this week. Incoming Mexican President was eager for a quick NAFTA renegotiation and he was echoed by the Trump administration. Canada and Mexico made sure to be clear that a trilateral negotiation is needed as the US has been pushing for two bilateral sit downs.

The loonie reached its higher level in six weeks on Wednesday amidst rising oil prices despite multiple evidence of ample supply. Disruptions in Saudi Arabia and the ongoing uncertainty with Iranian crude continue to push prices higher.

The main Canadian economic events during the week will be the release of the monthly GDP report on Tuesday and the Trade balance on Friday.

Yen Higher Ahead of Bank of Japan

The USD/JPY lost 0.43 percent in the last five trading sessions. The currency pair is trading at 110.95 ahead of the July 31 Bank of Japan (BOJ) policy meeting. The central bank has remained on the sidelines for most of the year and its most active contribution was to remove inflation targeting in April. The BOJ has in place an easing monetary policy that includes bond buying to keep 10 year bond yields under control.

There is a possibility that the BoJ will change the extreme form of its QE program on Tuesday, but it remains small given the lack of strong economic indicators out of Japan. Inflation continues to struggle and the economy contracted in the first quarter of 2018 so at this point it remains unlikely that the Bank of Japan would join the group of central banks who are scaling back their quantitive easing efforts.

The GBP/USD lost 0.08 percent during the week. The currency pair is trading at 1.3116 amid political tension due to Brexit with three consecutive weekly losses. The Brexit deal that was presented to the EU, a hard fought battle for Prime Minister Theresa May and for which hard core Brexiteers resigned, was knocked back by EU Brexit negotiator Michel Barnier. Key elements were rejected outright, even both parties still cling to an October deal.

The GBP lost despite heavy anticipation of a rate hike by the Bank of England (BoE) on super Thursday. The market is pricing in a 81 percent probability of a 25 basis points rate lift to 0.75 percent. Last meeting there were three dissenters that opposed holding rates. Despite a higher interest rate the comments from Bank of England Governor Mark Carney will be in focus as he could add a dovish tone as political uncertainty will surely make the job of protecting the UK economy harder.