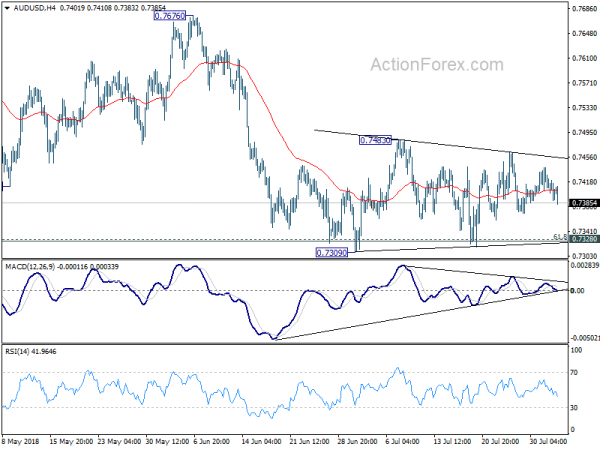 The FOMC rate decision overnight was largely ignored by the markets. Instead, Asian equities plunged sharply today as US formally announced to raise the tariffs on USD 200B of Chinese imports from 10% to 25%. Chinese stocks lead the decline with Shanghai SSE down -2.45% at the time of writing. HK HSI is down -2.3%. Nikkei is down -0.4% while Singapore Strait Times is also down -1.3%.

Yen gains broadly on risk aversion. While it’s still the weakest one for the week after BoJ triggered selloff, there is chance for Yen to reverse all the losses. Dollar follows as the second strongest after Asian selloff intensifies. As it has been happening this, the greenback gains every time trade tensions are escalated. Australian Dollar is suffering most today. Sterling is also trading generally softer as markets prepares for BoE rate hike, but possibly a dovish one.

Technically, after all the volatility, there is so far no change in most Dollar pairs outlook, as they’re bounded in range. EUR/USD is in range of 1.1574/1790. GBP/USD is in range of 1.3070/3212. AUD/USD in range of 0.7309/7483. The greenback haven’t made up it’s mind for a breakout yet. And we could probably need to wait for non-farm payroll report on Friday to be “that” trigger. Meanwhile, Yen’s rebound could quick put last week’s high back in to focus. In particular, 129.10 temporary low in EUR/JPY and 145.25 temporary low in GBP/JPY.

US to impose 25% tariffs on $200B in Chinese goods, joined forces with like-minded partners

The US Trade Representative formally said in a statement that it’s considering to raise the proposed tariffs on USD 200B in Chinese imports from 10% to 25%. In the statement, it said “the Trump Administration continues to urge China to stop its unfair practices, open its market, and engage in true market competition.” And it emphasized that the US has been “very clear about the specific changes China should undertake” But China “regrettably” responded by ” illegally retaliated against U.S. workers, farmers, ranchers and businesses.”

Also, USTR Robert Lighthizer said “the increase in the possible rate of the additional duty is intended to provide the Administration with additional options to encourage China to change its harmful policies and behavior and adopt policies that will lead to fairer markets and prosperity for all of our citizens.”

More importantly, the USTR specifically said that the US has “joined forces with like-minded partners around the world to address unfair trade practices such as forced technology transfer and intellectual property theft, and we remain ready to engage with China in negotiations that could resolve these and other problems detailed in our Section 301 report.”

Mexican head of the trade and NAFTA office Guillermo Malpica said yesterday that the US had “started showing more flexibility last week” on NAFTA renegotiation. And, he added that “we are getting close” to an agreement on one of the sticky point, autos rule of origin.

Mexican Economy Minister Ildefonso Guajardo also indicated earlier there was a shift in the focus of the debate in auto contents. He said “now what we are talking about is that a percentage of what is made in North America would be made in a high-salary zone …  What does this mean? That clearly, within the component of 100 percent of an automobile made in (the NAFTA zone), a percentage, it could be about 35 to 40 percent, is made in a high-salary zone.”

Canadian trade negotiator Colin Bird also said in an auto industry conference in Michigan that there was progress on auto content rules. He added that “harnessing the power of trade agreements to promote higher wages is the kind of policy all three countries can get behind.”

However, another sticky point of the sunset clause is not cleared yet. Bird also warned that “any one country being able to hold the agreement hostage every five years does not provide the certainty” for businesses.

US 10 year yield regained 3% handle overnight on supply driven pressure. Trump’s Treasury Department announced to raise long term debt issuance to USD 78B this quarter, up USD 5B. More importantly, that’s the third consecutive quarterly increase and there is no end in sight. The act is for coping with the procyclical tax cut of the Republicans and Trump’s expanded fiscal spending. The Congressional Budget Office estimated that the fiscal deficit will rise to USD 1T by 2020.

Fed kept federal funds rates unchanged at 1.75-2.00% as widely expected. Assessment on economic activity was upgraded from “solid” to strong”. Also, “household spending and business fixed investment spending have grown strongly.” Otherwise, the statement provided nothing new to the markets. As priced in by Fed fund futures, the chance of two more hikes by December to 2.25-2.50% has firmed up again this week to around 67.6%, from 65.5% a week ago.

BoE Super Thursday as the main focus of today

BoE “Super Thursday” is the major focus today. The central bank is widely expected to rise Bank rate by 25bps to 0.75%. That’s only the second hike in more than a decade, following the first last November. The voting and the new economic forecasts in the Inflation Report are the keys to watch.

Although the pickup in growth in the second quarter has reinforced most policymakers’ view that the slowdown in the first quarter was driven by temporary factors, the overall macroeconomic environment remains vulnerable to downside risks and Brexit uncertainty lingers. BoE could deliver a “dovish hike” this time, a tone similar to the one it adopted in November last year. More in BOE Expected to Deliver Dovish Rate Hike in August.

On the data front…

Japan monetary base rose 7.0% yoy in July, below expectation of 7.3% yoy. Australia trade surplus widened to AUD 1.87B in June, above expe