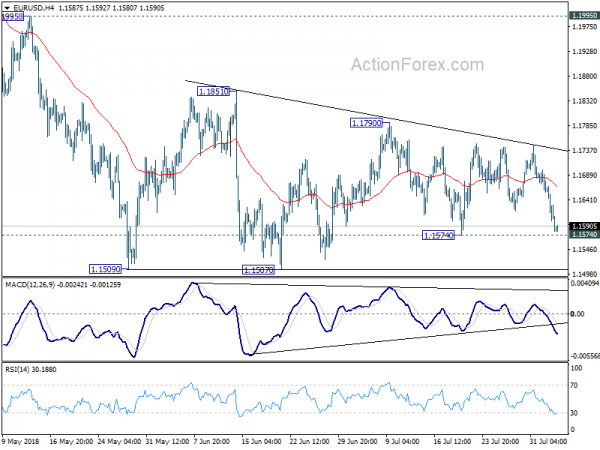 Sterling stabilizes after yesterday’s post BoE selloff. It’s trying for a recovery in Asian session today but lacks committed buying so far. Nonetheless, renewed selloff in New Zealand Dollar makes it the worst performing one for the week. The Pound is just the second weakest for the week. Canadian Dollar is staying as the strongest one for the week, followed by Dollar. The Loonie is somewhat supported by positive developments in NAFTA negotiation as well as resilience in oil price.

Technically, Dollar is now close to near term minor support again Euro and Swiss Franc. That is, 1.1574 in EUR/USD and 0.9977 in USD/CHF. Break of these two level will bring retest of 1.1507 low (EUR/USD) and 1.0067 high (USD/CHF). Such development will also raise the change of upside breakout in USD. Non-farm payroll report could be the event that prompts the move.

NFP to highlight today with focus on wage growth again

Non farm payroll is the major focus for today. NFP is expected to show 193k growth in jobs in July, slightly lower than prior month’s 213k. Unemployment rate is expected to drop back to 3.9%. Expectation on wage growth is high again, as average hourly earnings are seen growing 0.3% mom. Looking at other related data, ADP report showed a solid 219k growth in private sector jobs, above expectation of 186k. ISM manufacturing employment rose 0.5 to 56.5. The four week average of initial jobless claims dropped slightly from 217.25k to 221.50k. Consumer confidence rose 0.3 to 127.4 in July. Overall, the key to Dollar will stay on wage growth.

Mexico’s Economy Minister Ildefonso Guajardo met with US Trade Representative Robert Lighthizer in a bilateral NAFTA meeting yesterday. Guajardo said after the meeting that there is “very good advancement” in at least 20 items. But they have yet to discuss the stickier issues like the “sunset clause”. The meeting will continue on in Washington today.

It’s believed that the differences between the US and Mexico have somewhat narrowed after leftist Andres Manuel Lopez Obrador’s victory in the presidential election on July 1. A large part of the convergence was in both sides’ push to raise wages for auto workers. There’s a change that both US and Mexico could agree on most of the items before letting Canada join in again to make it trilateral.

Near 50% of UK businesses not anticipating any Brexit contingency plan

According to a survey by the Institute of Directors, only 31% of respondents are have carried out Brexit contingency plan. 8% have the plan implement already, 11% are drawing up the plans, and 12% have drawn up bot not implemented the plans yet. 19% of them haven’t even drawn up any plans even though the anticipate doing so. And 49% have no intention to do any Brexit contingency plans.

From the figures, it looks like business are not to worried about the impact of Brexit and transitions on businesses. But Director-General of the IoD Stephen Martin has another interpretation. He said that firms have been “left in the dark” when it comes to the planning. And “the reality is that many companies feel they can only make changes once there is tangible information about what they are adjusting to.” And he urged that “as long as no deal remains a possibility, it is essential that the government steps up to the plate and provides advice on preparing for such an outcome.”

BoJ minutes: No pronounced signs on improvement in trade tensions

BoJ released minutes of the June 14/15 meeting today (not the one earlier this week). The discussions during this meeting were of much less important to the one on July 30/31, after which BoJ announced strengthening of the easing framework. Nonetheless, there were still some interesting points to note.

One member questioned that BoJ’s credibility and commitment of achieving the 2% inflation target was undermined “because the description on the timing of reaching around 2 percent inflation had been deleted from the April 2018 Outlook Report.” And there communication strategy was a deeply discussed topic. There was consensus on emphasizing the bank’s commitment to achieving price stability.

The minutes also noted the “sluggish growth in the CPI since the start of fiscal 2018”. Some members pointed to “short term factors” including Yen’s appreciation. Theses members also pointed to “increasingly competitive environment surrounding the retail sector”. Some members took a long-term perspective and attribute to ” the fact that the mindset and behavior based on the assumption that wages and prices would not increase easily had been deeply entrenched among firms and households.” One member said inflation was constrained by “social mode” which was brought about by “prolonged period of low growth and deflation”.

On risks the minutes noted US economic policies, Brexit and geopolitical risks as the main ones. In particular, “a few members said that, although the U.S. protectionist trade policy had been criticized at international conferences such as the Group of Seven (G-7) meetings, there were no pronounced signs at the moment that the situation surrounding the policy would improve.”