USD/CAD Canadian Dollar Lower after Flight to Safety from Investors 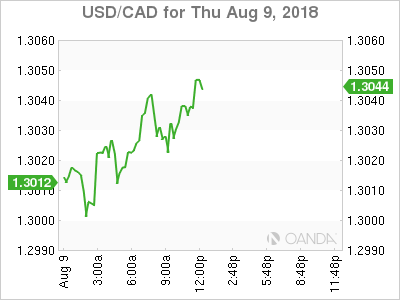 The Canadian dollar is lower on Thursday awaiting employment data to be released early on Friday. The diplomatic row between Canada and Saudi Arabia continues as both nations are standing their ground.

Oil prices have halted their skid as concerns on Iranian supplies following the reactivation of the US sanctions and a curb in demand if China and the US trade dispute is not resolved.

The loonie is getting little support form NAFTA optimism as Mexico and the US met without them and appear to be close to an auto agreement.

The USD/CAD gained 0.10 percent on Thursday. The currency pair is trading at 1.3034 as investors are flocking to safe havens as geopolitical and trade tensions are on the rise.

The USD is higher against the CAD, EUR, AUD and NZD but has depreciated against safe havens CHF and JPY with the GBP gaining after a huge boost to Brexit negotiations by the EU.

Canada is expected to have added 17,500 jobs last month. The gain after the strong 31,800 jobs in the previous report will keep the pressure on the Bank of Canada (BoC) to keep lifting its benchmark interest rate.

The market will focus on the data published by Statistics Canada on Friday at 8:30 am EDT to price in the effect of a strong employment component. Economists expect the unemployment rate to drop to 5.9 percent and added to a solid gain in jobs would put an October rate hike by the central bank firmly on the table.