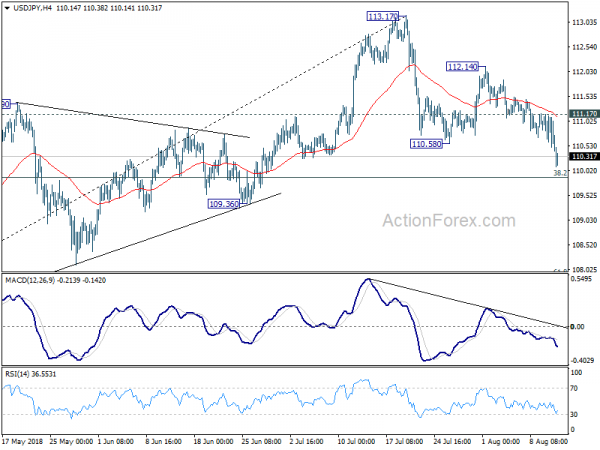 Turkish Lira continues to be the dominant theme in the financial markets today. The efforts by the government seemed to have calmed the markets a bit, in particular after CBRT’s announcements. But at the time of writing, USD/TRY is still up more than 4% today at around 6.7. It’s still vulnerable for another rise back above 7 handle. Risk aversion keeps Yen and Swiss Franc as the strongest ones for today. Meanwhile, Euro and Australian Dollar tie for being the weakest. Dollar is trading mixed for the moment.

Technically, there is renewed selling in USD/JPY today as it dipped to as low as 110.10. As it’s now close to 109.90 fibonacci level, we’ll start to look for bottoming signal. AUD/JPY’s break of 80.48 key support is also worth a mention as the cross has now resumed medium term down trend from 90.29. While Euro and Sterling stays weak, the decline is starting to look exhausted and we might see a bounce soon.

The Turkish central bank CBRT announced measures on Lira and FX liquidity management today. In short, CBRT pledged to provide “all the liquidity the banks need”. Discount rates for collateral against Lira transactions will be revised. Collateral FX deposit limits is raised from EUR 7.2B to EUR 20B. Banks are allowed to borrow FX despite in one-month maturity, in addition to one-week maturity. CBRT will release intermediary function as at the FX deposit markets. CBRT will also continue to buy foreign banknotes within their pre-determined limits at the Foreign Exchange and Banknotes Markets. Full statement here.

Separately, CBRT also announced to lower Lira reserve requirement ratios by 250bps for all maturities. RRR for non-core FX liabilities were lowered by 400bps, from 14-24% to 10-20%. Maximum average maintenance facility for FX liabilities has been raised to 8 percent. And, in addition to US dollars, euro can be used for the maintenance against Turkish lira reserves under the reserve options mechanism.

Erdogan blames Lira’s free fall as a plot, an operation against Turkey

Turkish President Tayyip Erdogan told supports in Trabzon on the Black Sea coast on Sunday that the country is not in a crisis, and the Lira’s free fall was a plot. He said “What is the reason for all this storm in a tea cup? There is no economic reason for this … This is called carrying out an operation against Turkey.”

Erdogan also repeated his call for citizens to buy Lira. He said, “I am specifically addressing our manufacturers: Do not rush to the banks to buy dollars. Do not take a stance saying ‘We are bankrupt, we are done, we should guarantee ourselves’. If you do that, that would be wrong. You should know that to keep this nation standing is … also the manufacturers’ duty.”

German EM Altmaier: We won’t let Washington dictate us with whom we can do business

German Economy Minister Peter Altmaier launched strong attack on Trump for his tariffs and sanctions. He told Bild am Sonntag newspaper that “this trade war is slowing down and destroying economic growth – and it creates new uncertainties.”

Meanwhile, the agreement between the EU and US “can only be first step”. Altmaier emphasized “Our goal is a global trade order with lower tariffs, less protectionism and open markets.”

Regarding US sanctions on Iran, Altmaier also pledged the Germany and EU will continue to support companies doing business with Iran. He warned that “we won’t let Washington dictate us with whom we can do business and we therefore stick to the Vienna Nuclear Agreement so that Iran cannot build atomic weapons.”

According to a latest study, more than 100 parliamentary seats have flipped from pro-Brexit in 2016 to pro-Bremain now. Focaldata, a consumer analytic company, compiled the breakdown data by modelling two YouGov polls conducted before and after Prime Minister Theresa May’s Chequers Deal. The study was jointly commissioned by anti-Brexit group Best for Britain and anti-racist group Hope Not Hate.

The study found that 112 seats out of 632 in England, Scotland and Wales have switched from leave to Remain. And there are now 341 seats with majority Remain support, up from 229 seats at the referendum in 2016. Among the switches, 97 was in England, 14, in Wales and 1 in Scotland. Also, there is now a majority for Remain in both Scotland and Wales.

Eloise Todd, the chief executive of Best for Britain, said: “the sands of public opinion are shifting and politicians risk falling behind”, and “the deal must be put to the people.” Nick Lowles, head of Hope not Hate, said “the rate of change appears to be quickening as the realities of what Brexit would mean become more apparent and the fears of a no-deal Brexit grow”.

The UK and EU are due to reconvene Brexit negotiation on Thursday in Brussels. UK is believed to be pushing the deadline for negotiation to October while EU is insisting to conclude it in September.

Economic data are the major focuses this week with not major central bank events. Many currencies will have something that could move them. Retail sales is probably the main one from the US. UK employment, CPI and retail sales could all trigger volatility in the pound. Eurozone GDP and Germany ZEW will be watched closely. Australia employment and w