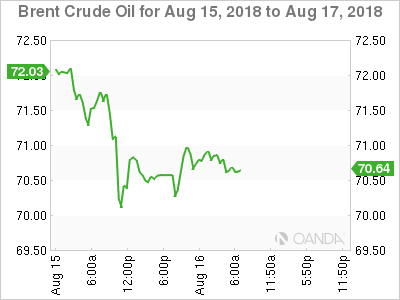 Thursday August 16: Five things the markets are talking about

This week, the mighty U.S dollar has gained traction from safe-haven investment flows on the back of trade disputes between the U.S and China.

Nonetheless, investor risk sentiment has received a boost overnight on two-fronts – reports that China has accepted a U.S invitation to trade talks in late August and news that Qatar has pledged to invest +$15B in Turkey are helping market risk sentiment and pressuring the dollar a tad. The Turkish lira has erased nearly all of its “economic attack” losses, with USD/TRY trading down -3.2% at $5.7682.

Note: Market focus now turns to the Turkish Finance Minister, Berat Albayrak, who is to address some of the key issues looked at by investors when he speaks to investors later this morning on a conference call (09:00 am EDT).

The de-escalation of trade tensions is providing both Euro stocks and U.S equity futures a bid, while Treasury prices dip. Elsewhere, metals prices are rebounding after yesterday’s session hammering, while oil prices claw back some of Wednesday’s losses.

On tap: Brexit talks between the E.U and the U.K resume in Brussels today, while stateside, U.S housing data is released at 08:30 am EDT.

Overnight, equity prices stayed lower in most Asian markets, pressured by disappointing tech earnings. Although most bourses pared some of their steep declines after China indicated that its commerce minister would visit the U.S for talks later this month.

In Japan, the Nikkei share average ended -0.1% lower, while the broader Topix slumped -0.6%, after touching its lowest since late March.

Down-under, Aussie shares closed unchanged overnight, as a sell-off in materials was offset by gains in the telecommunications sector. The S&P/ASX 200 index inched -0.01% lower at the close of trade after the benchmark rallied +0.5% on Wednesday. In S. Korea, the Kospi index declined -0.8%, tracking declines in the Chinese market.

In Hong Kong and China, stocks declined for a fifth and fourth consecutive session respectively as concerns over slower growth in China and Turkey’s currency crisis weighed on regional markets, but hopes of a possible reconciliation between the U.S and China helped cut the worst of the losses.

Weakness overnight was centered in energy and infrastructure names again. At the close of trade, the Hang Seng index fell -0.8%, while the China Enterprises Index lost -0.5%. In China, the blue-chip CSI300 index fell -0.4%, while the Shanghai Composite Index closed -0.7% lower.

In Europe, regional bourses have opened higher across the board on improved risk sentiment, except Italian stocks, which are under pressure from Genoa’s bridge collapse – Italy’s PM is looking to cancel Autostrade’s licence, dragging on construction sector.

Oil prices are small better bid on news that Beijing would send a delegation to Washington in the next two-weeks to try to resolve their trade dispute with the U.S. Nonetheless, market sentiment remains bearish amid the dispute and on concerns of an economic slowdown in emerging markets.

3. Sovereign yields back up

Earlier this morning, Norway’s central bank (Norges) kept rates unchanged at +0.5% as expected. The decision was unanimous. Policy makers reiterated that the first potential rate hike would likely occur next month, and that the outlook and the balance of risks do not appear to have changed substantially since the June report.

Norway’s underlying inflation remains below the inflation target, but the driving forces indicate it will rise further out. At the June meeting Norges Bank stated that the policy rate would most likely be increased by +0.25% to +0.75% in September.

The Turkish lira has erased nearly all its recent losses, with USD/TRY trading down -3.2% at $5.7682, after Qatar overnight offered Turkey an economic support package worth +$15B. On Monday, TRY broke record lows outright has threatened to lift inflation even higher, causing concerns of an economic meltdown in Turkey.

Note: Market focus now turns to the Turkish Finance Minister, Berat Albayrak, who is to address some of the key issues looked at by investors when he speaks to investors later this morning on a conference call (08:00 am EDT).

EUR/USD (€1.1386) is higher by +0.1%, but is unable to break above the key psychological €1.14 level as Italian budget concerns continue to linger in the background.

And again, the Hong Kong Monetary Authority (HKMA) reiterated to continue to buy HKD currency at $7.85 when weak-side of trading band is triggered.

According to the ONS, sales in July were +0.7% higher than in June and +3.5% higher than a year earlier. The market was expecting a +0.2% headline print.

The rise was driven by sales of food and drink as well as sales online, which offset a decline in sales at department stores and a fall in gas sales.