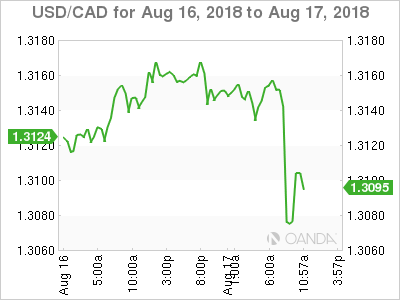 Today’s July report indicates that underlying, or core, inflation edged up slightly from the previous month, with prices rising in a range from +1.9% to +2.1%, based on the three preferred gauges used by the BoC for an average of +2.0%.

CAD ‘bulls’ will be looking to the crosses for further wins, especially GBP (£1.6646) and EUR (€1.4921) and will avoid the pain of the long dollar positions in this ‘risk off’ emerging market debacle.

From a technical perspective, the EUR now trading through the €1.1500 outright now looks more vulnerable, especially if the market begins to focus any further negative attention on Italy in respect to its exposure to Turkey and by the country’s 2019 budget process.

GBP/CAD has fallen from around £1.7037 since the Bank of England increased the interest rate to +0.75% on Aug. 2, mostly due to the fact that the market has switched their attention to Brexit uncertainties and the possibility of a no-deal scenario.

Canadian fundamentals support the loonie on any sell-off

After last Friday’s employment numbers where Canada added a net +54.1K jobs in July and this morning’s inflation reports adds to the probability the BoC will hike the benchmark interest rate one more time in 2018. Don’t expect the BoC to stray too far away from the Fed’s rate normalization plan.

So, look to the loonie to fly against contagion angst EUR or a no-Brexit deal pound. Even positive Nafta rhetoric will support the currency’s crusade!