Tesla is getting creamed again — stock down 5%, sliding below $290 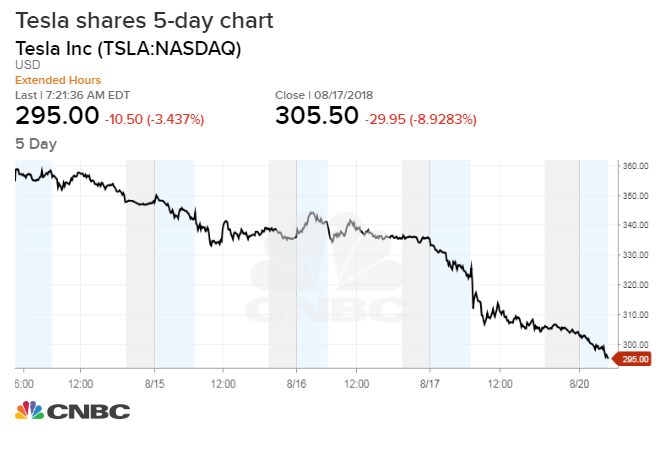 Tesla’s stock price sank to below $290 per share on Monday as investors in the electric car maker continued to doubt the validity of a privatization proposal by its founder Elon Musk.

Earlier Monday, J.P. Morgan slashed its projections for the carmaker, telling clients that while it originally took chief executive Elon Musk’s proposal to take the company private seriously, the funding to do so “appears to not have been secured.”

The firm pared its year-end price target for Tesla shares back to $195 from $308, representing 36 percent downside to Friday’s close.

But while the bearish J.P. Morgan note may have weighed on the stock Monday, investors have had plenty of reason to question the CEO over the past few weeks.

Shares were also lower after PIF, the Saudi Arabian sovereign wealth fund that Musk has said could help him fund an offer to take the car company private, is in talks to invest in rival Lucid Motors, Reuters reported cited sources.

Earlier reports said the SEC had intensified scrutiny of the automaker after the Aug. 7 tweet. A subpoena would be one of the first steps in a formal inquiry.

The SEC declined CNBC’s request for comment on the subpoena.

Musk admitted last Thursday in an emotional interview with The New York Times that the past year has been taxing for him, blaming so-called short-sellers — investors betting against the company — for much of his stress.

He told the newspaper he’s overwhelmed by the job, has been working up to 120 hours per week takes Ambien to fall asleep on occasion.

Tesla shares tumbled 9 percent to $306 the day following the interview.

Columnist and businesswoman Arianna Huffington later called on Musk to adopt a healthier work-life balance in light of the interview, but he said that’s not a viable option.

Musk told the Huffington Post founder in a tweeted Sunday morning that his car company and Ford are the only two American automakers that have avoided bankruptcy. He then added, in an apparent reference to his long workweek: “You think this is an option. It’s not.”