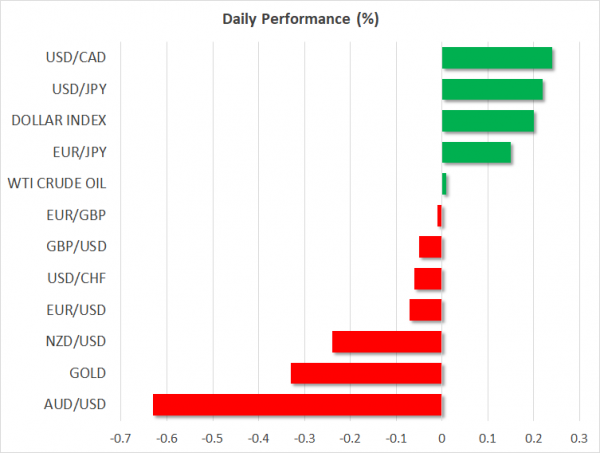 FOREX: The dollar’s index versus a basket of currencies continued to trade higher on Thursday and is looking set to put an end to the six-day streak of declines, its longest since February. The US currency is posting gains across the board, though excluding the Aussie, they’re not sizable in nature. Euro/dollar and pound/dollar are both lower by around 0.1%, with dollar/yen up by 0.2%, not far below the 111 handle. Flash PMI prints for August out of the eurozone were the most notable releases during morning European trading. The manufacturing PMI undershooting expectations and reentering a path of declines – after rising in July for the first time in six months – perhaps generated most attention out of the prints. The euro posted some modest losses as the data were made public. Elsewhere, the Aussie remains in focus as it continues to underperform on the back of political uncertainty clouding Australia; aussie/dollar is down by more than 0.6% and below the 0.73 mark. According to some analysts, developments in Australia may have acted as a catalyst for bringing the US currency’s safe-haven allure back to the fore.

STOCKS: At 1057 GMT, European equities were moving higher for the most part, though only moderately so. The pan-European Stoxx 600 was up by 0.1% and the blue-chip Euro Stoxx 50 was marginally higher. The UK’s FTSE 100 was flat, while the German DAX was down by 0.1% and France’s CAC 40 traded higher by 0.1%. On the list of the Dax’s lead underperformers were automakers BMW (-1.4%), Daimler (-1.2%) and Volkswagen (-0.8%), with trade-sensitive auto stocks overall underperforming on the back of tariff fears as the US and China implemented additional levies on one another on Thursday. Futures tracking the Dow, S&P 500 and Nasdaq 100 were little changed. Alibaba will be reporting quarterly results soon; before the opening bell on Wall Street.

COMMODITIES: WTI was steady at $67.89 per barrel after surging on Wednesday following the EIA’s weekly report which showed the biggest crude stockpile drop since late July. Brent crude traded 0.15% lower at $74.67/barrel. In precious metals, gold was 0.3% down, at $1,190.80/ounce. The greenback’s weakness in previous days allowed the dollar-denominated metal to move above its lowest since January 2017 of $1,159.96 hit last week, but USD strength in today’s trading is again weighing on gold prices.

Day ahead: ECB minutes due; Jackson Hole and other risk events on the horizon

A few releases remain pending on Thursday, though perhaps barring the ECB’s official record from its latest meeting, they seem unlikely to spur considerable movements in the currency markets. In light of this, the attention turns to the Jackson Hole summit, any updates on Brexit and the Sino-US trade deliberations, as well as the political situation in Australia.

The ECB’s meeting minutes pertaining to its July meeting will be hitting the markets at 1130 GMT. Commentary on trade, the trajectory of inflation and the timing the Bank plans to start normalizing rates will be attracting attention. Regarding the latter, the ECB’s guidance of keeping rates steady “at least through the summer of 2019” was a topic of great interest back in July. Mario Draghi, the central bank’s chief, said in the press conference following the meeting that this translates to no earlier than September, something which was viewed as dovish by investors and thus led to euro weakness. If the record show a considerable number of members deviating from this view, pushing for a hike earlier in time, then the euro is likely to build on gains from previous days that allowed it to distance itself from the 14-month low of $1.1297 hit in mid-August.

Also euro-related, preliminary eurozone consumer confidence data will be hitting the markets at 1400 GMT; the relevant index tracking consumer sentiment is expected to remain in negative territory for the third straight month, falling to -0.7 from July’s -0.6.

Out of the US, new home sales for July and Markit’s flash manufacturing PMI for August are the releases attracting most interest, though it bears mention that the two generally do not act as major market movers. The manufacturing PMI due at 1345 GMT is anticipated to ease a bit relative to July’s reading of 55.3, though still comfortably remain in expansion territory above 50, specifically at 55.0. New home sales are projected to grow by 2.2% m/m after declining by 5.3% in June to reach their lowest since late 2017 in a sign that the housing market is slowing; the reading will be made public at 1400 GMT. Meanwhile, weekly jobless claims data are also due out of the US at 1230 GMT.

A risk event taking place in the US from August 23-25 is the Jackson Hole Economic Policy Symposium. The summit’s overall theme is “Changing Market Structure and Implications for Monetary Policy”. Influential central bankers and fi