Week Ahead – US PCE inflation, Aussie Capex and Canadian GDP to Highlight Another Muted Week 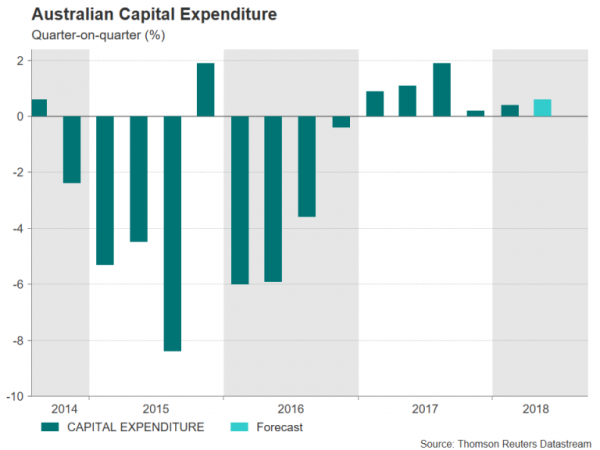 As summer draws to a close, it will be another lacklustre week for economic data in the coming seven days. The biggest weight will therefore fall on PCE inflation numbers out of the US, GDP figures from Canada and Australian quarterly capital expenditure data to keep the markets alive, barring of course any fresh developments on the trade front or in the Brexit negotiations. Other notable releases will include Eurozone flash inflation estimates, Chinese manufacturing PMIs and the second reading of US GDP growth for the second quarter.

After the past week’s quarterly construction data, investors will get another chance to gauge the strength of the Australian economy in the three months to June with the release of quarterly capital expenditure figures on Thursday. The indicator for construction work done beat expectations by a wide margin and healthy business spending numbers next week would further point to another solid quarter of GDP growth following the robust first quarter performance. Capital expenditure is forecast to come in at 0.6% quarter-on-quarter, ahead of the Q2 GDP estimates scheduled for September 5. Meanwhile, traders should additionally keep an eye out for July figures on building approvals, also due on Thursday, and private sector credit data on Friday.

The Australian dollar could be in line for a significant boost from better-than-expected capex numbers, having already rallied late this week after major political uncertainty was removed following the resignation of the prime minister, Malcolm Turnbull, and his replacement by the finance minister, Scott Morrison.

Another risk for the aussie next week are China’s official PMI releases. The manufacturing and non-manufacturing PMIs are both due on Friday. The manufacturing PMI is expected to ease from 51.2 to 51.0 in August, which would mark a six-month low. Australia’s currency is viewed as a liquid proxy for China-related trades as China is Australia’s biggest export destination. Any evidence that the Sino-US trade war is starting to hurt business activity in China would likely be negative for the aussie.

Japanese industrial production to nudge up in July

Japan’s economy grew by a better-than-expected 1.9% annualized rate in the second quarter, bouncing back impressively from a first quarter dip. However, with trade tensions remaining high, growth could be cooling again in the third quarter, with industrial output falling sharply in June and exports rising at a slower pace in July. Industrial production is forecast to post a small rebound in July, growing by 0.2% month-on-month in the preliminary estimate. A negative print could weigh on the yen as it would make it difficult for the Bank of Japan to exit from its massive stimulus program anytime soon. Other data though is more likely to underline the bright spots in Japan’s economy. Retail sales figures on Thursday and the unemployment rate on Friday, both for July, will be looked at to assess the strength of domestic demand. It follows recent encouraging signs that a tightening labour market is finally starting to lift Japanese wages, which in tu