US Dollar Drops After Powell Stresses Gradual Approach to Rates 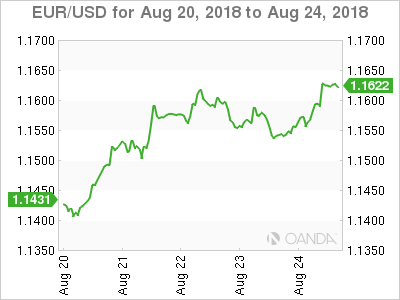 The US dollar is lower against most major pairs on Friday. The greenback was waiting for U.S. Federal Reserve Chair Powell’s speech at the central bank summit in Jackson Hole but in the end no new information was provided. Chair Powell reiterated the data dependency of the central bank and shared his optimism regarding inflation. The market is already pricing in two US rate hikes in 2018 and the somewhat dovish remarks from Powell did not add support to the US dollar.

The EUR/USD gained 1.61 percent during the week. The single pair is trading at 1.1625 as the dollar continued to slide against the EUR on rising political uncertainty in Washington.

The U.S. Federal Reserve has already hiked twice in 2018 and is on the path to lift interest rates two more times before the end of the year. The minutes from the August Federal Open Market Committee (FOMC) puts the September meeting as a solid possibility with a December hike still on the table. The CME FedWatch has a 96 percent probability of a 25 basis points hike on September 26.

The EUR/USD is close to erasing the losses that started in August 1. Trade war concerns as US tariffs came into effect have triggered risk aversion taking the dollar higher but political turmoil surrounding the White House keep pressuring the currency downward.

The economic calendar next week is not crowded with the second estimate of Q2 GDP data in the United States the main realease. Growth is expected to remain close to 4.0 percent and to keep validating the policy decisions from the Fed. On the European calendar Germany’s Ifo Institute will publish its survey of business conditions and expectations.

Loonie Higher After Powell and Ahead of Poloz Remarks

The USD/CAD fell 0.22 percent in the last five days. The currency pair is trading at 1.3033 after the remarks from Fed Chair Jerome Powell added little support to the greenback. Bank of Canada (BoC) Governor Stephen Poloz will speak on Saturday August 25 as part of the Jackson Hole Symposium.

NAFTA negotiations seem to be finally getting traction, but the choice of the US to deal with Mexico first still leaves a lot of question marks regarding how it will affect the Canadian economy. On Thursday Foreign Affairs Minister Chrystia Freeland said she was encouraged by optimism and ready to rejoin the talks. The Mexican team has said that they will work through the weekend and said that they haven’t bought their return tickets.

BoC Governor Poloz sounded optimistic on Friday that NAFTA will be worked out based on the developments of the last couple of weeks.

Oil Rebounds Boosted by Soft Dollar and Lower US Inventories

Oil prices recovered during the week. West Texas Intermediate is trading at $69.35 and since the Asian open the black stuff has headed higher. The release of a larger than expected US crude stocks on Wednesday put WTI over the $68 price level. The Energy Information Administration (EIA) reported a drop of 5.8 million barrels against a forecast of 1.6 million drawdown.

The US sanctions on Iran are beginning to have a negative effect on crude exports from that country, even though they don’t kick in until November. European airlines are halting flights to Iran with advance notice but most will end that route before the end of September.

The trade dispute between China and the US has kept oil prices from rising higher but for the moment the Iran disruption has cancelled out most of the effects of a possible oversupply if a full on trade war were to take place.