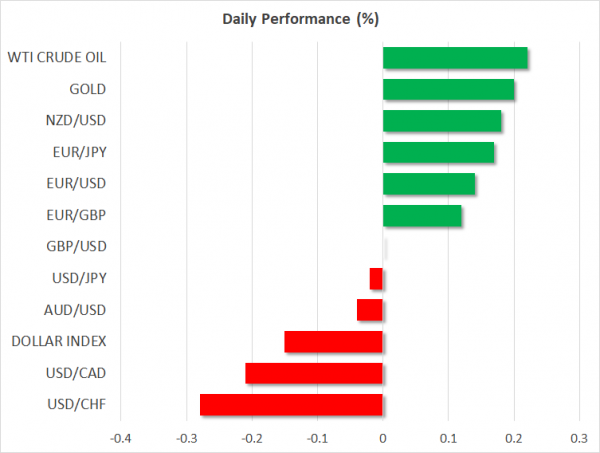 FOREX: The dollar traded 0.16% lower against a basket of six major currencies on Tuesday, erasing the modest gains it posted earlier in the session and looking set to post the third day of declines in a row. The world’s reserve currency has been under pressure lately as trade tensions appear to have eased somewhat and investors unwound some of their safe-haven bets, with some less-than-hawkish remarks from Fed chief Powell also weighing. Reflecting the greenback’s underperformance, euro/dollar was up by 0.14%, trading within breathing distance of the 1.1700 mark. Meanwhile, dollar/yen was near its opening levels, as the safe-haven Japanese currency was on the back foot amid the risk-on tones in markets. Sterling/dollar was flat as well. That said, the British currency was down by 0.12% against the euro, with euro/pound having touched a fresh one-year high of 0.9076 earlier today, after UK PM Theresa May was quoted as saying a no-deal Brexit “wouldn’t be the end of the world”. Elsewhere, dollar/loonie was down by 0.21%, hovering near a 10-week low amid hopes that the NAFTA negotiations may bear fruit before long, following the US-Mexico agreement yesterday.

STOCKS: European indices were mostly in the green on Tuesday, taking their cue from their US and Asian counterparts, with risk appetite being supported by optimism that trade tensions are set to deescalate somewhat. The UK’s FTSE 100 led the pack higher after remaining closed for a holiday yesterday, gaining 0.34%. The French CAC 40 climbed by 0.25%, while the German DAX 30 edged up by 0.18%. The blue-chip STOXX 50 was practically flat, while the pan-European STOXX 600 inched higher by 0.08%. The only underperformers were the Italian FTSE MIB (-0.44%) and the Spanish IBEX 35 (-0.35%). Turning to the US, futures suggest the S&P 500, Dow Jones, and Nasdaq 100 are all set to open higher today.

COMMODITIES: Oil prices turned higher, aided by the pullback in the dollar, which renders the dollar-denominated precious liquid more attractive for investors using foreign currencies. WTI is up by 0.22% at $69.03 per barrel, while Brent crude edged higher by 0.41% at $76.52/barrel. In precious metals, gold was up by 0.2%, trading near the $1214 per ounce mark.

With only second-tier economic indicators out of the US being released on Tuesday, market participants will likely keep their gaze locked on trade issues and specifically, how the US-Canada NAFTA negotiations will play out.

After the US and Mexico struck a trade accord on Monday, attention has turned firmly back to Canada, which was until now absent from the negotiating table. While the two sides said they prefer to have Canada on board too – making this a trilateral deal like NAFTA – they also hinted they could proceed regardless, if an arrangement with Canada is not achievable. Hence, pressure on Canadian officials is extremely high at a time when their negotiating capital has been depleted, having little leverage left with which to push for more favorable terms. Canada’s foreign minister will meet US officials today to try and reach common ground. Any positive remarks pointing to a trilateral deal being finalized soon may support the loonie and perhaps also benefit risky assets like stocks, whereas anything suggesting Canada may be “left out” could generate the opposite reactions.

Turning to economic data, the US Conference Board consumer confidence index for August is due out at 1400 GMT. It is expected to decline somewhat but to still remain at an elevated level, consistent with healthy consumer optimism. An hour earlier, at 1300 GMT, the Case-Shiller figures tracking US housing prices for June will be made public.

In energy markets, the weekly private API crude inventory data are slated for release at 2030 GMT.