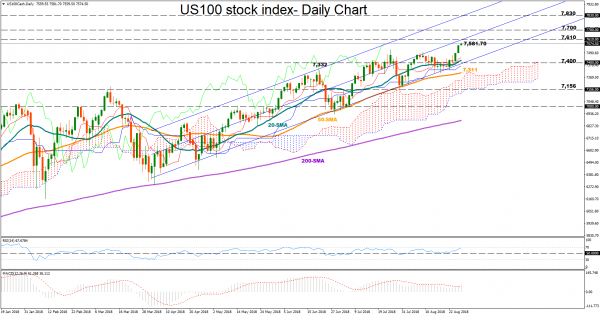 The US100 stock index (NASDAQ 100) continues to rise above the Ichimoku cloud, remaining inside a bullish channel over the past four months, stretching its upward pattern to a fresh record high of 7,581.70 on Tuesday. According to the MACD, positive momentum could push for further gains in the short-term as the indicator picks up steam above its red signal line. The RSI is also advancing, though, it is relatively close to the 70 overbought threshold; negative corrections cannot be excluded should it move above 70.

In the positive scenario, where the price continues to expand above today’s high of 7,581.70, a new top could be formed around 7,610, where the middle bound of the ascending channel is currently located. If the market manages to overcome that area, traders could look for resistance at the 7,700 round level before steeper bullish actions take the price up to the upper bound of the channel, currently near 7,830.

A reversal to the downside could stall at the bottom of the channel and the 20-day simple moving average – they both lie around 7,400 at the moment. Further below, the 50-day SMA at 7,311 could also provide support, as the index was unable to fall significantly under that line in the last two months and any violation at this point could potentially trigger further sell-off in the market, probably leading the price down to 7,156, a previous support and resistance area.

Regarding the medium-term picture, the bullish outlook has built up as the index continues to record all-time highs; a dive below 7,000 could shift the sentiment into a bearish one.

To sum up, the short-term bias is bullish though the index could be close to overbought levels, with the medium-term outlook also being positive.