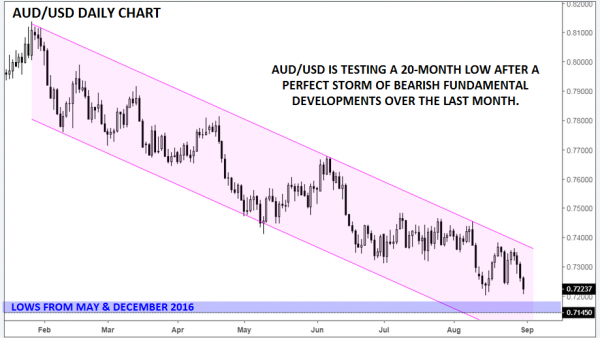 As the final week of the month draws to a close, Aussie bulls are clearly licking their wounds.

The Australian dollar has been the worst-performing over the month, week, and day so far as the currency faces a “perfect storm” of bearish developments:

The combination of the above factors has made it extremely unlikely that the RBA will raise interest rates any time soon. Indeed, markets are not pricing in a rate hike from the RBA until late next year, and there’s risk that traders could push that view out toward 2020 (or even start to price in a potential interest rate cut) if the trade war continues to escalate.

Technically speaking, AUD/USD remains locked in a crystal-clear bearish channel. After peaking in the mid-0.7300s earlier this week, the currency has fallen to test its 20-month low near 0.7200 now. A break below this level would point toward a test of the prominent support levels from May and December of 2016 in the mid-0.7100s, and an even steeper drop cannot be ruled out. At this point, only a break back above the bearish trend line near 0.7400 would erase the bearish bias in the pair.