Dollar Looking for Economic Guidance Ahead of Busy Week 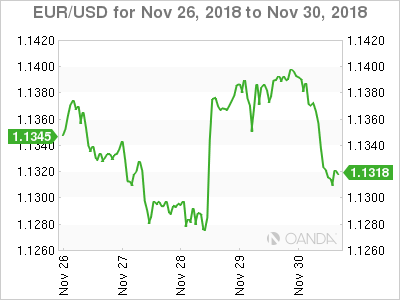 The US dollar is higher against most major pairs on Friday ahead of the G20 meeting. The greenback fell across the board on Wednesday after the market took the comments from Fed Chair Powell on interest rates to mean less rate hikes from the central bank. The minutes form the November Federal Open Market Committee (FOMC) showed all members are onboard with more rates hikes coming “very soon” but the dovish narrative was in full force and the dollar only partially recovered to end up slightly higher against major pairs on a weekly basis.

The EUR/USD fell 0.67 percent on Friday as risk aversion ahead of the weekend favoured the US dollar. The single currency is trading at 1.1316 awaiting the outcome of the G20 meeting in Argentina. Previous meeting of global leaders have ended in stalemates and clearly show not everybody is on the same page. There have been signs of both China and the United States willing to cooperate and reduce tariffs, but they have come with an equal measure of escalation of trade disputes. Uncertainty is high as a week full of economic indicator rebased and geopolitical risks will end on Friday with the release of the U.S. non farm payrolls (NFP).

The U.S. Federal Reserve has hiked 3 times in 2018 and the market estimates another interact rate lift on December 19. The CME FedWatch tool shows a 82.7 percent probability of a rate hike despite the comments from Fed members. The US central bank is expected to slowdown its monetary policy tightening in 2019, but will finish the year with a 25 basis point lift after every major FOMC.

The US economic calendar will kick off on Monday, December 3 with the release of the ISM Manufacturing PMI forecasted to slowdown slightly to 57.5. Non-Manufacturing PMI will follow on Wednesday along the release of the ADP private payrolls report. Friday, December 7 the U.S. non farm payrolls (NFP) will be posted with another big jobs gain expected, and a 0.3 percent average hourly earnings gain.

The Canadian dollar is lower on Friday against the US dollar. The USD/CAD gained 0.08 percent on Friday to put the loonie down 0.47 percent versus the greenback on the last week of November. Lower oil prices and a perceived slowdown of the economy could mean the Bank of Canada (BoC) remains data dependant and pushes back plans to raise interest rates until spring although there is still a 70 percent probability priced in for a January rate hike.

Canadian Prime Minister was joined by US President Donald Trump and outgoing Mexican President Pena Nieto to sign the USMCA with the G20 as the background. Trade is a big topic for discussion at the meeting, with a likely outcome of no deal reached between China and the United States. Canada is not immune to trade uncertainty despite renewing its partnership with the US and Mexico.

Oil prices fell on Friday and the market will focus on the outcome of the meeting between the OPEC and other major producers to once again agree on a crude production cut to stem the drop in energy prices.

Oil prices have plummeted more than 20 percent during November. Weather and geopolitical factors have disrupted supply, but as supply has recovered and in the case of Iran, waivers were issued, oversupply concerns took over pushing prices lower.

Russia has not committed to a new agreement to limit production. The deal with OPEC and other major producers stabilized prices, but as the US President pressures Saudi Arabia to keep prices low it must look to its own best interests.

Trade disputes have also impacted energy prices as global growth estimates have been slashed as more protectionist measures are introduced. Higher supply with shrinking demand have resulted in lower crude prices, with the OPEC trying to tackle the first part of the equation. The second production cut agreement is not a done deal at this point and comments from Russia do not hint at a strong commitment at this stage.

The yellow metal ended November flat as risk events kept the commodity bid, while trade concerns and monetary policy boosted the US dollar. Gold has rejoined investor’s portafolio as a safe haven, but still struggles to overcome its weakness against the US dollar as US triggered trade aversion has made the greenback the de facto refuge.

The U.S. Federal Reserve is likely to hike in December with economic indicators validating the decision as US jobs and inflation continue to advance. Next year is a bigger question mark as the Fed will not be able to hike four times as in 2018 and the economy is expected to cool down. Gold is forecasted to trade higher next year as risk will remain, but the dollar will lose the support from the central bank.