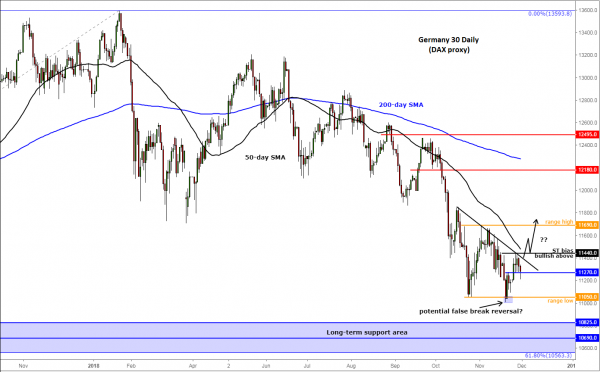 It feels like I repeat this every week, but next week is going to be very interesting in the markets indeed. The G20 summit in Argentina will conclude at the weekend which potentially means fireworks at the Asian open on Sunday night as risk-sensitive assets could gap sharply in one or the other direction, depending on the outcome of trade talks between Presidents of China and the US. Next week we will also have two major central bank meetings, lots of economic data – including the US monthly jobs report – and a potential crude supply cut decision from the OPEC+ group. So, there’s something for everyone.

Ahead of the busy next week, the markets were fairly quiet on Friday and existing ranges were maintained as some market participants were keen to stay on the side-lines until after the weekend’s risk events were out of the way. But this week has seen some sharp moves in equity, FX and commodity markets. US stocks rallied sharply in mid-week while the dollar slumped after the Federal Reserve Chairman Jerome Powell evidently prepared the market for a pause in the once-a-quarter rate hikes in 2019 by delivering some not-so-hawkish remarks. He chose his words carefully and said interest rates are “just below” the level where the central bank may consider pausing. This was in stark contrast to remarks from just a month ago when he said rates were “a long way from neutral.” However, despite the sharp rally on Wall Street, stocks in Europe barely reacted. Investors here clearly had other things to worry about, such as trade wars, Brexit and the standoff between Italy and the EU over the nation’s 2019 budget, not to mention concerns over the economy or the slump in oil prices.

But sentiment could certainly improve next week should there be a positive resolution in trade talks between the US and China over the weekend. Conversely, if the trade dispute continues unresolved then expect to see more weakness for stocks. For FX traders, the likes of the Aussie, kiwi and yuan will be the main focal points in the immediate aftermath of the G20 summit.

Meanwhile oil prices bounced back late in the day on Friday on reports that the OPEC committee had suggested a 1.3 million barrel per day cut from the October level. Prior to this headline, oil prices had fallen near their recent lows as participants in the oil market weren’t convinced that the OPEC+ would cut supplies next week. The pressure has certainly been building as prices continued to fall amid ongoing concerns over excessive supply and lower demand growth. With WTI hovering around the $50 mark and Brent around $58, both crude contracts have given up around 50% of their gains made since hitting a low in 2016. This represents a significant drop for a healthy market, which makes intervention from the OPEC+ group even more likely. The trouble is Saudi Arabia’s Energy Minister Khalid al-Falih has made it clear that his country wouldn’t cut production alone. Meanwhile Iran are among some of the major oil producers who will undoubtedly press Saudi to bear the brunt of any production cuts, since the OPEC’s de facto leader had ramped up production by 1 million barrels a day since the summer. Russia, meanwhile, has insisted it is happy with the price of oil around $60 per barrel, which is slightly above where Brent was trading ahead of the OPEC meeting. If no action is taken, oi prices could certainly drop further, while a production cut should lead to a sizeable rebound for theses severely oversold levels.

NFP among the data highlights

Because of the G20 and OPEC+ meetings, next week’s upcoming data releases might not garner as much attention as would normally be the case. However, with the Fed turning more data-dependant again amid signs of weakening growth, Friday’s jobs and more importantly the wags data will be scrutinised closely. Meanwhile, there are two major central bank meetings to look forward to next week: The Reserve Bank of Australia on Tuesday and Bank of Canada on Wednesday. Neither central bank is looking to hike, which means rates are likely to be kept at 1.50 and 1.75 percent respectively. The Australian and Canadian dollars might move sharply nonetheless, should their respective rate statements convey any surprises. Next week’s other data releases include manufacturing PMIs from both the UK and US on Monday; Aussie GDP, UK retail sales, US ADP and ISM services PMI on Wednesday; Aussie retail sales, German factory orders on Thursday, and Canadian employment report on Friday.